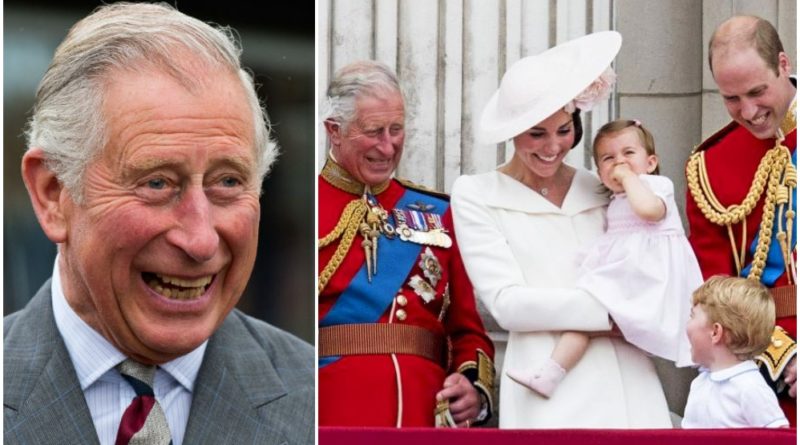 A new video taken inside the doting grandfather Charles’s home, shows he keeps a cute family photo in a green frame.

The photo, which he keeps in his living room, is one of the official snaps taken on Prince Louis’ christening day. The lovely photo features grandpa Charles with all three of his grandchildren.

Camilla, his sons, William and Harry and their wives Kate and Meghan are also in the picture, which was taken by British photographer Matt Holyoak. The family photo was spotted in in the background of a new video message posted on Clarence House’s Twitter account on Tuesday.

In the video, Prince Charles talks about his Royal Tour of West Africa with Duchess Camilla.

The message reads: “Tomorrow The Prince of Wales and The Duchess of Cornwall arrive in The Gambia for the start of the Royal visit to West Africa. Listen to The Prince speak about how much he is looking forward to #RoyalVisitTheGambia, #RoyalVisitGhana and #RoyalVisitNigeria.”

Next spring Prince Charles will become a granddad for the fourth time when Meghan gives birth to her first child.

So, he will have to get an updated family photo to put in the frame to include his unborn grandchild.

Prince Charles spoke about son Harry is set to become a father during a visit to Lochnagar Distillery in Crathie, Aberdeenshire.

He revealed how he and his family celebrated Duchess Meghan’s pregnancy news. During his engagement, he was asked whether he had toasted becoming a grandfather again. And Prince Charles revealed: “Oh yes, absolutely. Several times, thank you.”

Earlier, Prince Charles has talked about the role of being grandfather. He said: “It’s a different part of your life. The great thing is to encourage them. Show them things to take their interest. “My grandmother did that, she was wonderful.”

He added: “It is very important to create a bond when they are very young.”

Harry Revealed The Reason For One Of His Worst Speech Ever