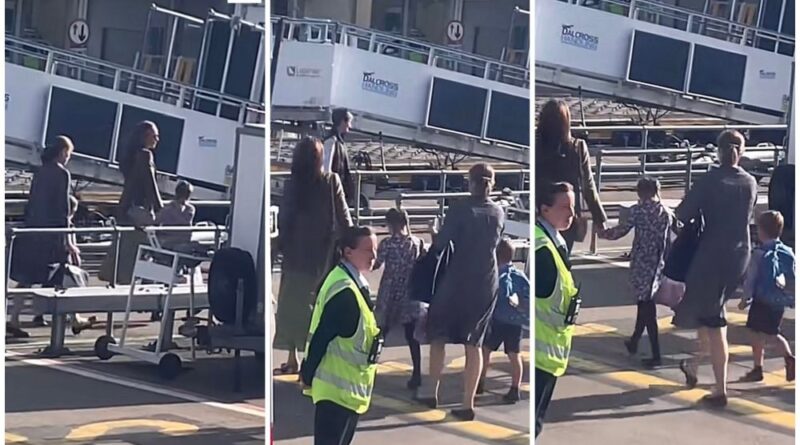 Kate Middleton has just arrived in Scotland along with Princess Charlotte, seven, and Prince Louis, four – but they did so on an economy flight!

In a video doing the rounds, which was shared this Sunday evening on TikTok, the Duchess of Cambridge is spotted disembarking a commercial flight along with her two youngest children, while it would appear that Prince William and Prince George have travelled separately.

“On a flight to Scotland, Kate Middleton, both kids, nanny and security 2 rows in front of me,” states the description of the TikTok video. “Could get a private jet or helicopter but keeping it simple, flying economy,” added the original poster.

In-flight entertainment is also the same for royals it seems, as the user added: “She even got up halfway through the flight to get her daughter’s iPad. And yes she was stunning, even gave me a smile while looking back at the row behind her to talk to her son.

“No one on board took any photos or videos. Just a mum taking her children on holiday to see grandmother, but there was a buzz on board,” and we’re glad their privacy was respected.

The clip shows Kate donned in a chic linen-look midi skirt in sage green, layered with a khaki blazer, her hair in natural waves and accessorised with a cream shoulder bag, in what is a practical yet elegant airport-ready ensemble.

As for the Duchess’ children, Princess Charlotte looked equally elegant in a long-sleeved floral dress, with her hair in neat French plaits, while Prince Louis was dressed in navy tailored shorts and a blue shirt.

The Cambridge family is heading to Balmoral for the last couple of weeks of August, Her Majesty’s residence in the Scottish Highlands to keep the royal tradition of spending the holidays there, a tradition which dates back to the time Queen Victoria acquired the estate.

It is a stunning estate spanning around 50,000 acres, including awe-inspiring views of mountains, rivers, lochs, woodlands and gardens – it’s hardly a surprise the royals like spending their days there.

READ NEXT: Kate And William Sent Touching Message For The Start Of School

Will Prince Harry Inspire Meghan To Be Like Princess Diana?