Prince George, Princess Charlotte and Prince Louis have joined thousands of people across the UK in a huge round-of-applause for NHS workers.

The sweet siblings, who are currently in Anmer Hall, Norfolk, joined the nation to thank nurses, doctors, emergency services, and everyone who helps in the battle against the coronavirus pandemic.

Prince William and Kate shared a video of the trio clapping enthusiastically on their official Kensington Royal Instagram account. It was posted shortly after the applause took place at 8 pm.

An accompanying message read: “To all the doctors, nurses, carers, GPs, pharmacists, volunteers and other NHS staff working tirelessly to help those affected by #COVID19: thank you.”

Taken in their garden, the video shows Princess Charlotte, dressed in a striped top, smiling as she claps. In the middle is Prince Louis looking so grown up, dressed in a blue jumper. Next to him is Prince George, who has grown considerably taller since Christmas.

George, Charlotte and Louis were not the only royals who took part in Clap for our Carers this evening. Prince Edward and Sophie also shared a video of their family applauding the NHS workers.

“The Earl and Countess of Wessex, and their children, show their support for all those working on the frontline,” reads the caption on that clip.

Earlier in the day, the Royal Family’s social media account posted information about the #ClapForCarers movement, along with a countdown clock to encourage followers to join in.

It followed a day in which members of the Royal Family worked from home amid tightened restrictions to combat the spread of Covid-19.

This comes only a day after it was revealed that Prince Charles tested positive for coronavirus. He is currently isolating with wife Camilla at their Scottish home, Birkhall, on the Queen’s Balmoral estate.

READ NEXT: How William And Harry Found Out Prince Chares Has Coronavirus

Two Unseen Photos Of Prince Philip And The Cambridges Revealed 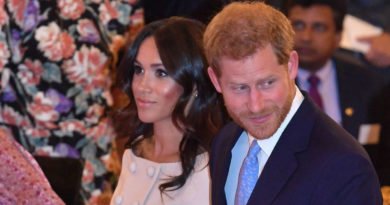 Meghan And Harry Opened Up About Their Honeymoon Destination