With Easter right around the corner, and the current situation not looking like it will be slowing down anytime soon, it seems that everyone will have to improvise their Easter celebrations. The same goes for the Duke and Duchess of Cambridge, who have three children, but it should not be a problem for Kate and Prince William, as they are used to being hands-on parents and have been doing a great job so far, so no doubt they will think something up so that Prince George, Princess Charlotte and Prince Louis have fun on Easter.

The family of five are staying at their country home, Anmer Hall, in Norfolk, and it is most likely that any activities they have planned will be done there. Coming from a family of party planners, and having experience helping her parents, Carole and Michael Middleton with their business, Party Pieces, Kate is likely to have lots of tricks up her sleeves to entertain her children.

In 2018, during the annual Easter day service in Windsor, Kate told some little girls at St George’s Chapel that George and Charlotte took part in an Easter egg hunt in the morning, which will no doubt be recreated this year in Norfolk.

The three Cambridge children are yet to publicly join their parents at the annual Easter Sunday service, with Prince William and Kate being regular attendees throughout the years. Last year’s church service was particularly special as it coincided with the Queen’s 93rd birthday.

Usually, for Easter the royal gather to celebrate it at Windsor, but due to the ongoing crisis, all of them will be staying home. No doubt the family will be keeping in touch with one another using modern technology, such as video messaging.

It is unfortunate that this is happening during this time when the royal has so much to celebrate. The Queen will celebrate her 94th birthday on 21 April, while her great-grandson Prince Louis will turn two on 23 April. The Prince of Wales and Duchess of Cornwall celebrate their 15th wedding anniversary on Thursday this week, with Prince William and Kate set to mark their ninth year of marriage on 29 April. 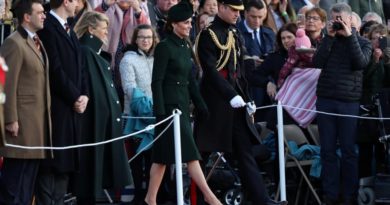