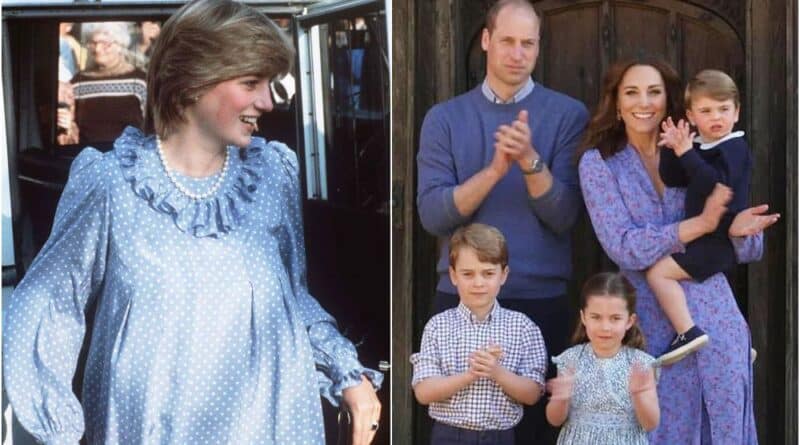 Duchess Kate often pays subtle sartorial tribute to her late mother-in-law, Princess Diana. And she made no exception with her latest outfit choice too.

Standing on the doorstep of her Anmer Hall home in Norfolk, Kate and her family took part in Clap For Our Carers. William, Kate, George, Charlotte and Louis joined the nation in applauding frontline workers during the coronavirus pandemic.

Not only they were all dressed in blue to honour the NHS, but the Duchess also made sweet nod to Princess Diana with her dress.

Kate floral dress is similar in cut and style to Diana’s style she wore many times while pregnant. Especially this one. Although Diana’s dress had a polka dot pattern and higher neck, the vibes are definitely pretty similar.

Diana wore the ruffled collar dress when she was pregnant with William as she embraced the trend of the time.

Kate’s Ghost dress, which costs £129, flew off the virtual shelves almost immediately after the Cambridges made their surprise appearance.

Still, that didn’t surprise us having in mind the duchess’ influence to move product has been well-documented, and even given a name: the “Kate Middleton Effect.”

Not only the match with outfit choices, but Charlotte is ‘just as competitive as her mom too.

Judi James, body language expert, told FEMAIL that the young Princess appears to be ‘the little leader in the family dynamic’ as she started the applause.

“Charlotte has always been the one who seems the most enthusiastic about waving and clapping to the public. And her meet and greet with the crowds at Christmas suggested Kate and William might acknowledge the fact that she is currently the most confident of their children in social situations.”

READ NEXT: Kate Makes Surprise Revelation About Louis On His Birthday