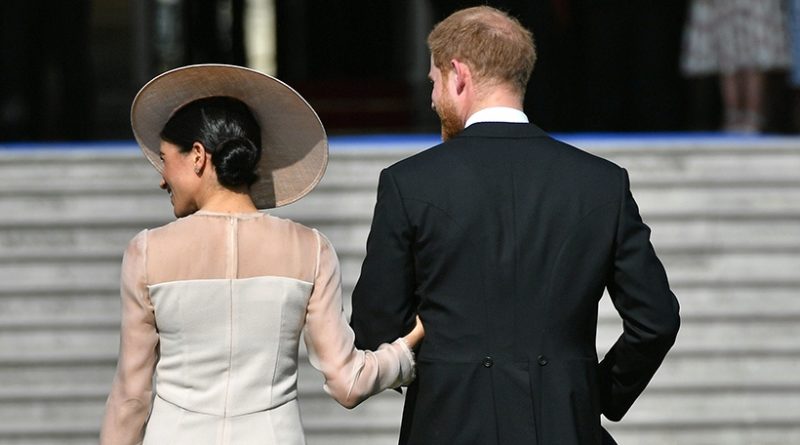 The Duke and Duchess of Sussex are hitting the ground running!

Harry and Meghan, who tied the knot on May 19th in Windsor, postponed their honeymoon by a few days in order to attend a Garden Party in honor of Prince Charles’ 70th birthday. The royals attended a garden party alongside some 6,000 guests, who are representatives from Charles’ patronages, charities, and military affiliations.

Meghan looked really gorgeous in a dress by Goat and a hat by Philip Treacy. And apparently, she opted to follow in the footsteps of her sister-in-law, Kate Middleton when it comes to her fashion decisions. She wore a label favored by the Duchess of Cambridge. And not only she chose to color-block and coordinate all her accessories from head-to-toe, one of Kate’s favorite looks, but she rocked some tights for the occasion. Wearing tights is a royal rule she may haven’t followed previously.

Harry gave a speech in tribute to Charles, who turns 70 in November, saying: “In my mind, this event sums up your approach to work.

“I know you really didn’t want today to be about you, and would far rather the focus be on the people and all the organizations represented here. I know that in your mind you see the opportunity of bringing everyone together as a chance to thank them for all the amazing work. “It is your selfless drive to effect change – whether that is to improve the lives of those who are on the wrong path, to save an important piece of our natural heritage, or to protect a particular species under threat – with which William and I draw inspiration from every day.”

The garden party at Buckingham Palace, which honors Charles’ patronages, military affiliations, and charities, also paid tribute to first responders of the terrorist attack at Ariana Grande’s Manchester concert in May 2017.

Kensington Palace revealed that Harry and Meghan won’t jet off for a romantic honeymoon right after the wedding. They postponed it so they could celebrate with Prince Charles.

Father Charles, played a special role during the couple’s ceremony at St. George’s Chapel. He walked Meghan down the aisle. And also, he throws a small and private evening reception for the newlyweds.

“The couple will be going on the honeymoon, but not straight away,” according to Jason Knauf.

“They will have their first engagement as a married couple in the week after the wedding.” The Duke and Duchess of Sussex are allegedly going on a honeymoon in Africa, a continent that is special to them both.

Louis’ Official Christening Photos: The Family Of Five Pictured For The First Time