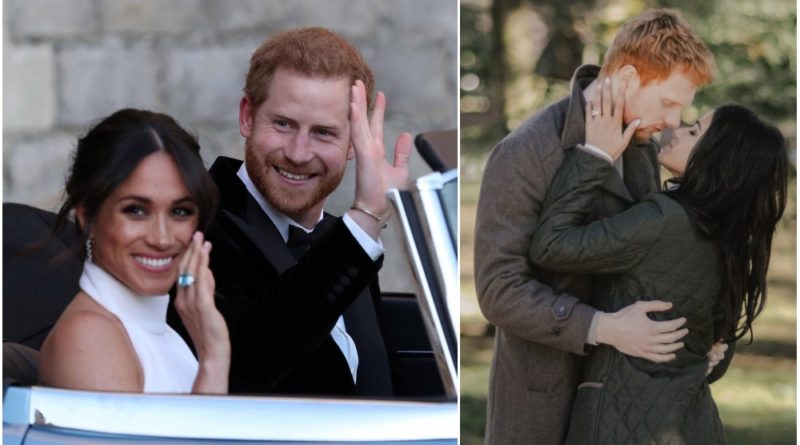 Considering the amount of fans Harry and Meghan have, it didn’t surprise us that Lifetime wanted to double down on its fantasy-fiction treatment of the couple.

As it was announced earlier, Lifetime will treat fans with an exciting sequel: Harry & Meghan: Becoming Royal and it will center around Harry and Meghan’s first year of marriage.

On Monday, March 25, the production released first photos of Charlie Field and Tiffany Marie Smith as the Duke and Duchess of Sussex in the sequel to the movie Harry & Meghan: A Royal Romance.  Filming is underway in Vancouver, and the movie will premiere on Memorial Day: Monday, May 27 at 8 p.m. ET/PT. In one of the photos you can see the Duchess of Sussex on the wedding day having the Queen Mary Diamond bandeau tiara placed on her head. The second one shows, Harry and Meghan leaning in for a kiss.

The new movie will examine Harry and Meghan’s love story, “pulling back the curtain to reveal the untold joys and challenges of life inside the royal family during their pivotal first years of marriage,” according to the press release.

Beyond blending their families and cultures, Harry and Meghan’s core values are put to the test as they try to find the balance between honoring royal tradition and staying true to their beliefs.” While the film continues their love story, the network has new lead actors for the sequel. Field and Smith are replacing Murray Fraser and Parisa Fitz-Henley, who portrayed the couple in Lifetime’s original film.

The new movie comes just a year after Harry and Meghan tied the knot on May 19, 2018. It’s still uncertain whether the film will cover the couple’s pregnancy too.

In a new interview with Vanity Fair, Smith and screenwriter Scarlett Lacey teased what fans can expect in the  sequel. “The wedding certainly looms large,” said Lacey.

“This film deals with the drama of planning a wedding: the moment you’d much rather elope, the moment your family might mess it all up — and they nearly do!” But it’ll also go far beyond saying I do.

“The moment you first wake up as husband and wife, the realities of your new life hitting you hard, the first big fight, the first big make-up,” she continued about what’s ahead.

According to Smith, the film will also explore Meghan and Kate’s realtionship.

“We got to do some stuff with Kate, which I really liked,” said the actor.

“I think one of the biggest things, obviously, about Meghan is that she’s such a supporter of other women and women’s empowerment. That was something I think was important for all of us to focus on, myself included.”