Prince George’s debut at this years Christmas church service came with a rare fashion change for him!

On Wednesday, Prince George attended a Christmas Day church service with his close and extended family for the first time.

The third-in-line to the throne was very smartly dressed for the occasion. Instead of his usual shorts and George was dressed in long pants! George wore a dark blue blazer and jumper, which matched dad William’s blue coat and pants.

This marked the second time he has worn long pants in public. Prince George was allowed to wear long, black pants for the first time in public, for uncle Harry’s wedding. He wore a pair of custom-made black Dege & Skinner pants and a miniature version of the Blues and Royals coat that dad William and uncle Harry wore.

The young Prince usually wears shorts in public, because as tradition dictates, boys should only be allowed to graduate to trousers from the age of seven or eight.

It is considered very suburban for a little boy to be in long trousers when he is just a little boy,” said Ingrid Seward, editor-in-chief of Majesty magazine to People. “It is shorted until you’re 8 and then ‘woo, you’re in long trousers. They suddenly feel very grown-up.'”

The royal siblings have always remained at home whenever William and Kate have attended Christmas day church service. Therefore, their appearance was a really special moment for us, the royal fans.

After Christmas service at the church, the family returns to a holiday lunch at the Queen’s before they all sit down to watch the annual broadcast of the queen’s Christmas speech.

READ NEXT: Video: Princess Charlotte Gave Her First Curtsy To The Queen 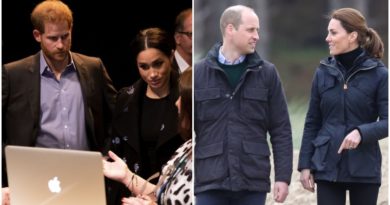