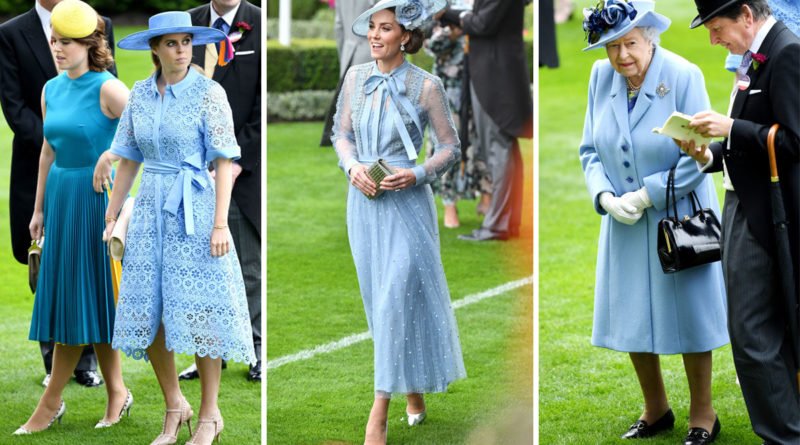 The Royal family were there for the very first day of the annual racing event at Ascot. Usually, we get to see a rainbow of colours and different kinds of outfits at an event like this, rarely seeing someone wear matching colours, especially not with the Queen. But this year lots of royal ladies, including the Queen, went with a blue outfit. What might the reason for this be?

From the Queen herself to Duchess of Cambridge Kate Middleton, yesterday was an ocean of blue outfits at the Ascot’s royal enclosure. As the royal started to arrive, fans noticed that most of the royal ladies were wearing different shades of the same colour, which sparked the debate on why is that?

The men were nothing out of the ordinary, going with the traditional top hats and morning suits, with the women being the ones bringing more colour to the event. This is too big of a coincidence for it to be unplanned, so this unity in colour must have been arranged beforehand and we think we know the reason why. Other royals that sported blue as well were Princess Anne’s daughter, Zara Tindall, Princess Eugenie and Princess Beatrice.

From darker tones to a paler shade of the same colour, coming in all kinds of designs and different styles, it seems that all royal ladies got the same memo.

The Duchess of Cambridge chose a pretty lace dress by Elie Saab, paired with a Philip Treacy hat.

The Queen wore a blue floral dress with a cornflower blue coat over the top, while a blue hat with large flowers and white gloves completed her look.

Zara Tindall, 38, also chose a floral dress, pairing it with a baby blue hat worn on top of her head. A pair of drop pearl earrings could be seen in her ears.

Princess Beatrice also joined in on the fun with a matching outfit as well. She chose a lace shirt dress which had three-quarter length sleeves and came down past her knee.

Usually royal try not to wear the same colours when attending an event together, so when they do, we must realize that there must be a big reason.

Blue has always been a royal colour with special meaning to the British Royal family. Historically blue is a colour that has long been associated with royalty, art, military, business, which may have informed the Royals’ choice to wear it.

It also might be as it is the favourite colour of the monarch, with the Queen going for blue three times as more than any other shade when it came to official royal engagements. Actually, in a study done by Vogue magazine in 2012, the Queen wore blue to 29 per cent of the state occasions she attended that year. More recently the Queen wore blue to welcome President Trump to the UK when he arrived on his state visit.

Yesterday’s sea of blue may have been pure coincidence, but it could have also been a touching show of solidarity by female royal family members to their matriarch.

The Queen is known for often wearing bright colours as they allow her to stand out at big state occasions.

READ NEXT: William And Kate Sent Flowers To Woman Who Was Injured In Royal Convoy Crash