On Wednesday Queen Elizabeth just turned 95 years old, with the Duke and Duchess of Cambridge marking it by sharing a wonderful photo on Instagram Stories.

The photograph, initially posted by the Royal Family’s Instagram account, shows the monarch smiling as she visited the MI5’s headquarters in February last year.

The caption that went with the original post went like this: “Today is The Queen’s 95th birthday. The Queen was born at 2.40 am on 21 April 1926 at 17 Bruton Street in Mayfair, London. She was the first child of The Duke and Duchess of York, who later became King George VI and Queen Elizabeth. This year Her Majesty remains at Windsor Castle, during a period of Royal Mourning following the death of The Duke of Edinburgh.”

The Queen isn’t much of a party-gal on her birthday, preferring to spend the day in private. This year should be especially low-key as her husband, Prince Philip, passed away only last week. With his passing, this birthday will be the first one that the monarch will spend without him by her side in over 70 years.

For the ceremony on the 17th of April at St George’s Chapel, the Queen was supported by her children and grandchildren as she laid her husband to rest. Due to the pandemic, the whole ceremony was according to the government restrictions, with the guest list being limited to 30 people, all of whom wore masks inside the chapel and kept social distancing. Despite all these things, the ceremony was a fitting farewell for the Duke of Edinburgh, who had always planned for it to be a small event with minimal fuss.

Queen Elizabeth wore black for the ceremony and will continue to do so in the near future. She was accompanied by her lady-in-waiting Lady Susan Hussey as she travelled to the service, and remaining sombre throughout the whole ceremony. She had tons of flowers laid on Prince Philip’s coffin, handpicking them herself, choosing white lilies, small white roses, white freesia, white waxflower, white sweet peas and jasmine for her dear husband.

It was reported that members of the royal family have made a rotating schedule for when to visit the Queen at Windsor Castle during her mourning period, so no doubt she will be having visitors for her milestone birthday.

Every person has their own coping mechanism, and it seems that the monarchs are getting emotional support from two new puppies, with the queen being seen taking them for a walk in Windsor on the eve of the funeral.

There have been reports that after her husband’s death, the Queen will continue to live mainly at Windsor Castle where she spent most of the pandemic and the lockdowns, instead of her official London residence, Buckingham Palace.

She will still stay at Balmoral, Scotland, in the summer and in Sandringham for Christmas, but the royal staff have been instructed that Windsor Castle will be known as her permanent home from now on. 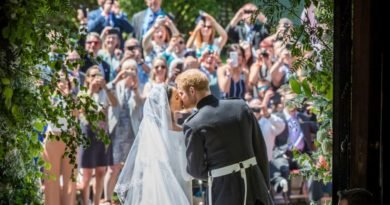