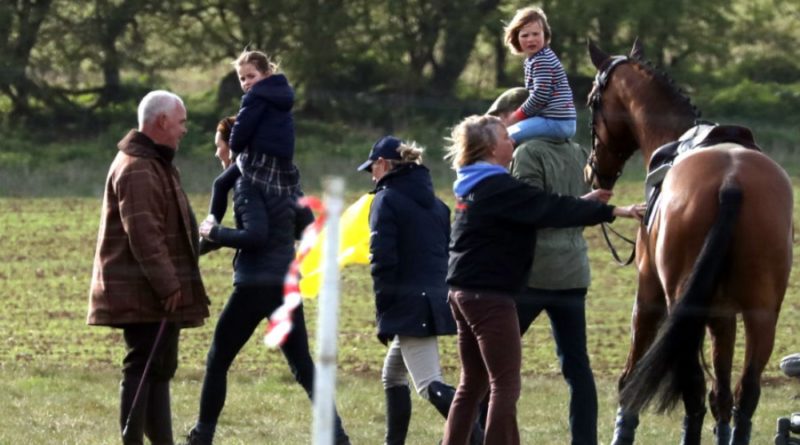 On Friday they joined up with the Tindalls for a fun day out at the Burnham horse trials in Norfolk. In the photos taken that day, we can see Kate Middleton giving her daughter Princess Charlotte, a piggyback ride, while Mia Tindall, was on Prince William’s shoulders.

Kate and William’s eldest, Prince George was seen having fun getting a piggyback from Mike Tindall as he clutched onto a toy sword. In other photos, Mike can also be seen pushing baby Lena in her buggy as they watched Zara compete in the races. Prince Louis, the youngest of the Cambridge children, was not seen in any of the photos and most likely he spent the afternoon with the family’s nanny Maria Teresa Turrion Borrallo.

Prince William and Kate, along with their three children, love spending time at their beloved country home and do it as often as they can. The 10-bedroom home has tennis courts and an expansive garden-perfect when you have young children that love to run around and play. The property also allows the family maximum privacy, something that Kate and William really appreciate.

Shortly after the birth of their first child Prince George in 2013, a no-fly zone was enforced over Anmer Hall, with the parents also planting a row of trees along their driveway to block the view for the annoying media. Both William and Kate are hard-working, hands-on parents, and are doing their best to provide their children with an as normal upbringing as they can. They often times talk about their children during royal engagements, and regularly discuss all the activities they love doing with their children, from arts and crafts and cooking dinner to dancing and hunting spiders in the garden.

The Cambridges have a close relationship with the Tindalls, and the fact that both royal couples have children very close in age really helps.

Mike previously spoke about his hopes for their children forming friendships shortly after the birth of Princess Charlotte in 2015. He told HELLO!: “it’s great” a new generation of young royals are springing up. “They’re all quite close in age and hopefully they’ll grow up as good friends,” he said. He also spoke very fondly of Kate and William during a recent appearance on House of Rugby, where he was asked to make his dream team consisting only from member of the royal family.

“I’ve got the Duchess of Cambridge on one wing because she loves running, she can run all day. Engine!” he said.

When asked which of the couple is the faster runner, Mike said that William, nicknamed Willy, is even faster than him. “Willy’s quick. I’ve raced him, he’s quick, he has really fast leg speed,” said Mike.

READ NEXT: William And Kate Surprised Everyone With Engagement