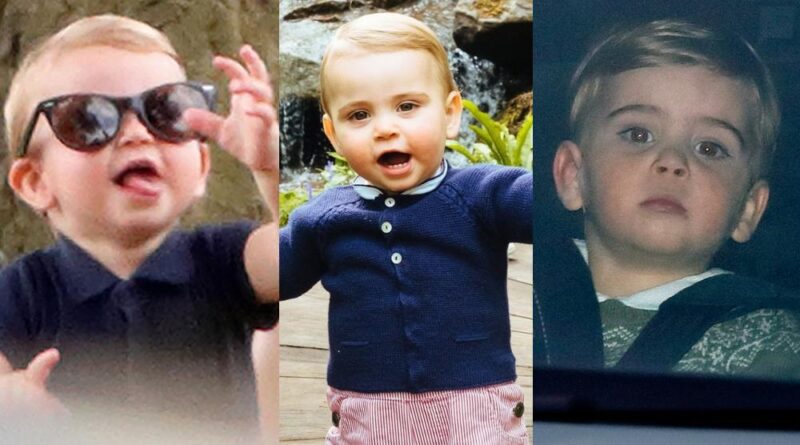 We don’t know if it’s his goofy faces or his little royal wave. His cute outfits or all the cool stuff he acquires from being a royal. But it’s something. He is not even 2 years old and we are already looking up interesting facts about Prince Louis because we adore him.

Prince Louis is the third and youngest child of Prince William and Kate, born on April 23, 2018. He’s got two older siblings, a brother, Prince George and a sister, Princess Charlotte.

Due to his age, little else is known about Prince Lois than his siblings. However, that doesn’t mean he is a complete stranger to us. Here are some interesting facts to know about William and Kate’s youngest.

Both Prince George and Princess Charlotte were named fairly quickly, only two days after their births. However, it took 4 days for Prince William and Kate to release Prince Louis’ name to the public, on 27 April 2018.

It is believed that the couple wanted to wait to introduce their son to Prince Charles before making the announcement. On the day of Louis’ birth, Charles was in Scotland, and the day after, he had to travel to France for Anzac Day Memorial.

Prince Louis Has More Than One Name

Louis is a traditional nod to the Duke of Edinburgh’s maternal grandfather, Prince Louis Alexander of Battenberg. It was chosen as Prince William’s third middle name when he was born, while Prince George’s full name is George Alexander Louis. Louis is a name of German, French origin meaning “renowned warrior”.

Arthur is also one of his father’s and Prince Charles’ middle names. It was a middle name of the Queen’s father, King George VI too.

Charles is a clear nod to his paternal grandpa Prince Charles.

It seems that Prince Louis has inherited mom Kate’s love for the outdoors.

Prince Louis appears to have inherited his mother Kate Middleton’s love for the outdoors. During a surprise visit to the Royal Horticultural Society’s garden, the Duchess revealed that her youngest child has got quite an affinity for nature.

Sarah Griffiths, 25, whose daughter Matilda caught Kate’s attention, said: “She was telling us how her son Louis loves smelling flowers. He enjoys being outside.”

Prince Louis broke a royal record Duchess Kate gave birth to him at 11:01 a.m. on April 23, 2018. He weighed in at 8 pounds 7 ounces which made him the heaviest Cambridge baby and heir to the throne in at least 100 years.

Duchess Kate has revealed that ‘Mary’ was one of the first words uttered by Prince Louis. She told the story to the former Great British Bake Off judge in a BBC Christmas special, A Berry Royal Christmas.

The Duchess told Mary: “One of Louis’ first words was ‘Mary’, because right at his height are all my cooking books in the kitchen bookshelf. And children are really fascinated by faces, and your faces are all over your cooking books and he would say ‘That’s Mary Berry’ … so he would definitely recognise you if he saw you today.”

Prince Louis Is Fifth In Line For The Throne

Prince Louis is fifth in line to the throne as the youngest child of the Duke and Duchess of Cambridge.

With Queen Elizabeth II as a current monarch, next in line to the throne is her eldest child, Prince Charles. Prince William, is second in line; then follows Prince George in third position, and Princess Charlotte, in fourth.

It’s highly unlikely he will ever be a reigning monarch as he is below both George and Charlotte. If Prince George starts a family when he is older, his children would push down his two siblings in line to the throne.

During the same show, Duchess Kate gave an insight into the family’s Christmas dinner and their very own vegetable patch.

During a visit to Evelina London children’s hospital, Duchess Kate joined young children at a workshop to see how arts support children’s health, well-being and happiness.

While there, she met baby Rose Parker and her mom Emily. She cooed over Rose and made her smile by tickling her legs. Kate revealed to her mother: “My son Louis also has very tickly knees.”

Duchess of Cambridge is reportedly taking her youngest child Louis to weekly Monkey Music sessions. The Duchess and her little boy get fully involved in the fun activities like singing and dancing.

The Daily Mail’s Charlotte Griffiths revealed: “There are dozens of the events run all over the country every day, and for security reasons I won’t say which class Kate attends.

“However, I can reveal that she gets stuck in. The classes are led by a monkey puppet who asks mums to sing with their babies and dance around the room holding scarfs.”

Prince Louis Has An Adorable Nursery

Louis’ nursery which was also his brother and sister’s nursery at one point, William and Kate decided to decorate with a classic theme, Peter Rabbit.

Other famous characters that could feature include Jemima Puddle-Duck, Mrs Tiggy-Winkle, Tom Kitten and Miss Moppet.

READ NEXT: George, Charlotte And Louis Appear In New Video For Important Cause

Prince William Gives Insight Into Latest Conversation With His Children