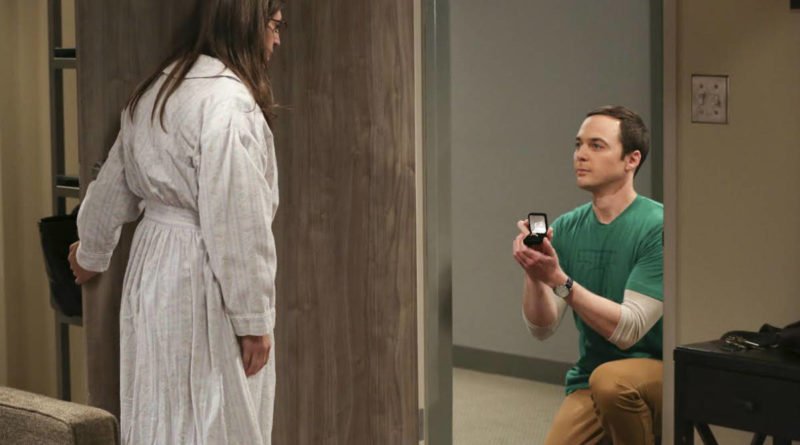 All of us have been waiting for a long time to reveal Amy’s answer to Sheldon’s shocking proposal. Now, when a new teaser for the upcoming season has been released, it shows us a peek at what happens after Sheldon asks the big question.

It is simply a dream come true for Amy. Until Sheldon’s phone starts ringing… ‘Are you really going to answer that right now?’, Amy cries.

And, once again viewers are still no closer to figuring out if Amy will say yes or no.

In an interview with The Hollywood Reporter, the showrunner Steve Molaro didn’t want to reveal something more on Amy and other’s reaction on the dramatic moment.

‘I don’t know what’s going to happen but any viewer would imagine she would [say yes] – but we, the audience, know what propelled him there. It’s an interesting situation and I’m excited to see how it turns out,’ he said. if you mapped it out as a graph, it’s probably very consistent,’ he added.

‘It’s slow, but it all makes sense. I would imagine [the group] will be happy about it but I don’t know. It’s shocking and at the same time, it isn’t.’

Season 11 of Big Bang Theory will air September 25 on CBS.

It was back in May that Sheldon shocked viewers when he asked for Amy’s hand in marriage during the series ten season finale.

Sheldon made an unexpected move after he accidentally entertained an inappropriate relationship with a colleague while Amy was away. However, when he realized that his friend wanted more than friendship, he hopped a plane to Princeton, New Jersey where Amy has just started a fellowship.

Besides the fact that he spontaneously decided to ask Amy to marry him, he had already bought a ring. Therefore, he must have been having thoughts about the proposal earlier. Season 10 ended with Amy surprised at the door and Sheldon on one knee, holding out a ring.

Then Sheldon asked ‘Will you marry me?’

There were so many fans who couldn’t believe what just happened. One fan wrote ‘OK when Sheldon & Amy kissed for the first time I cried. Now I’m crying because he proposed’. Another one: ‘Best episode ever!’

When asked about the shocking proposal, Molaro said to USA Today: ‘The season finale is a real pivotal moment for Sheldon and Amy.

‘When we shot that [proposal] scene, everybody was on stage, [including] the actors who weren’t in the scene.

‘It was emotionally important for us to be part of it. And the studio audience just lost their minds.’

Mayim revealed to Daily Telegraph: ‘I was shocked when Sheldon proposed but again – they [the writers] get to decide what happens to Amy, not me!’

She said to Radio Times: ‘I honestly don’t know what her response will be. And I could see her saying no or yes!

‘It’s really up to our writers to come up with how this moment will play out, and they might not even know at this time which way they want to take it.’