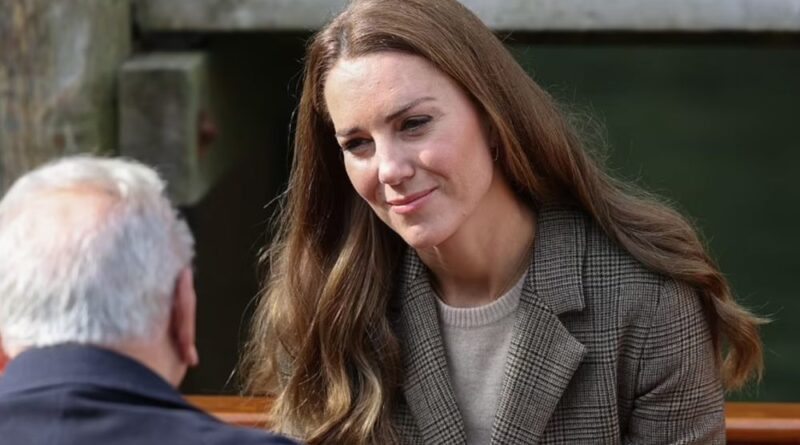 Duchess Kate was in her element today as she carried out two engagements during a visit to Cumbria, a county in northwest England.

With both of these visits, she publicly supported the great impact time outside has on young people.

According to the palace, Kate “passionately believes that spending time outdoors plays a pivotal role in children and young people’s future health and happiness, building foundations that last over a lifetime by encouraging active exploration and the opportunity to form and strengthen positive relationships.”

Duchess Kate, who is Honorary Air Commandant of the Royal Air Force Air Cadets, began her day by joining a group of Air Cadets for mountain biking.

For the occasion, she rewore her khaki coloured Seeland puffer jacket combined with a pair of black jeans.

Following the biking, Kate was photographed trying abseiling at Cathedral Quarry in Little Langdale, Cumbria. For the second engagement, she swapped her quilted jacket for a checked Really Wild blazer from one of her favorite brands and an oatmeal jumper. Thirteen-year-old Itelouwa Odipe, from Lancaster, spoke to the Duchess as she waited to try abseiling.

He said: “She was about to abseil and I was next in line so she asked me if I wanted to go before her. I was a bit scared so I said no.

“She said if I did she would meet me down there.”

The teenager spoke to her again after deciding not to brave the drop.

“She said it was really good and I should try it,” he said.

“I think she was very kind. Even though she is a royal highness she still does things normal humans do.”

Kate also asked the group about the activities they took part in and how the pandemic had affected their mental health.

She said of the activities: “It’s so great to have these challenges.”

Duchess Camilla Has Tested Positive For COVID After Prince Charles