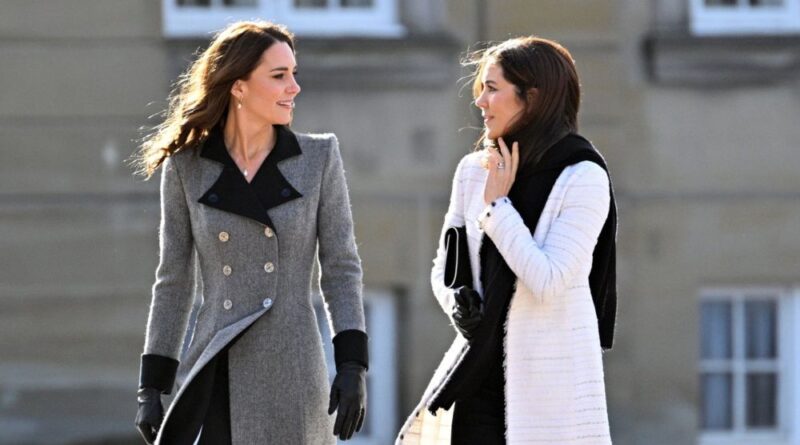 Dressed casually for her outing, the Duchess of Cambridge started her final day in Copenhagen by visiting the Forest Kindergarten, During Denmark Tour

Kate had an eventful visit, receiving a bouquet of flowers from the children and even having a go at chopping wood for herself!

Kate Middleton was there to learn about a teaching concept that has children’s lessons going outside the classroom and into nature to focus on their emotional and social development rather than just academic skills.

Kate’s focus when travelling to Copenhage has been to learn from academics and health professionals about Denmark’s approach to early years development, where the country is a world leader.

The Duchess will have a full day, later on, she will receive an official welcome from Denmark’s Queen Margrethe and her daughter-in-law Crown Princess Mary, at Christian IX’s Palace in Copenhagen.

She will also visit the Danner Crisis Centre together with Mary. The centre, which is supported by the Mary Foundation which was founded by the Crown Princess in 2007, helps women and children who have been exposed to domestic violence.

The visit is also there to pay tribute to Britain and Denmark’s historic ties and celebrate the joint jubilees, Queen Elizabeth’s Platinum Jubilee and Queen Margrethe’s Golden Jubilee, both of which happen to fall in 2022.

Wearing a cream roll neck jumper, black jeans and a Seeland jacket the Duchess looked in her element as she joined the children for activities. The Duchess also kept her accessories simple with just a pair of hooped earrings.

We know the Cambridges love the outdoors and Kate has often spoken on that love’s benefits at her royal engagements, even back in February 2020 when she appeared on the Happy Mum, Happy Baby podcast where she completed the sentence, “I’m happy when…,” Kate replied: “I’m with my family outside in the countryside and we’re all filthy dirty.”

READ NEXT: How Prince William And Kate Caribbean Tour Could Change The Future Of The British Monarchy

The Duchess then proceeded to Christian IX’s Palace, where she was greeted by Queen Margrethe and Crown Princess Mary, who gave her a formal welcome to Denmark.

During their audience at the palace, the royal ladies laugh together.

Kate and Mary first met during the Duke and Duchess of Cambridge’s 2011 visit to Denmark, and Crown Princess Mary and her husband, Crown Prince Frederik, also attended Royal Ascot with William and Kate in 2016.

The royal families of the United Kingdom and Denmark are inextricably linked, with the Queen and Queen Margrethe being third cousins, as they are both descended from Queen Victoria and King Christian IX of Denmark.

The Duchess and Crown Princess walked from Christian IX’s Palace to Frederik VIII’s Palace via the Amalienborg Courtyard for a private lunch.

Kate had changed from casual attire to a new grey cashmere and wool coat from Catherine Walker, and the two royal ladies looked elegant in their ensembles. She completed her look with pearl jewellery, black gloves, and heels.

Kate joined Mary at the Danner Crisis Centre after their private lunch.

The shelter provides assistance to women and children who have been victims of domestic violence. It is supported by the Mary Foundation, which the crown princess established in 2007.