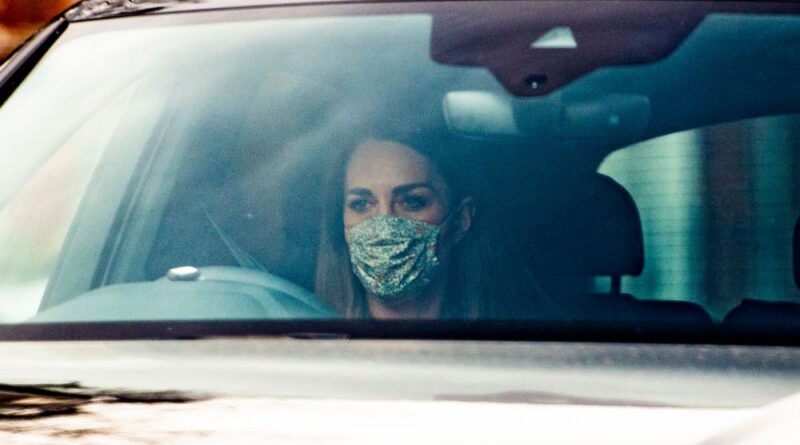 And so the Meghan Markle-Prince Harry saga continues with the former actress revealing lots of details about the royal family-including Kate Middleton.

Kate Middleton was seen driving into Kensington Palace a couple of hours after Meghan Markle revealed that she had made her cry before her wedding to Prince Harry.

The Duchess of Cambridge has already addressed the issue with an Instagram post after the accusations was made, and it seems the she doesn’t look too distraught in the driver’s seat of her vehicle after this. But this is hard to say for certain as the royal wore a green floral patterned face mask and her brown hair down, leaving only the eyes as indicators, even with the her not paying the cameras any attention.

This comes only hours after Prince Harry and Meghan Markle’s sit-down with Oprah aired in the US. During the conversation, Meghan, who is currently pregnant, claimed that Kate had made her cry ahead of her wedding to Prince Harry. She talked about all the reports of rifts between her and Kate and said that the media just wanted “a hero and a villain”.

She was especially shocked when articles started popping up that she was the one who drove Kate to tears in the days leading up to her wedding, when in reality it was the other way around.

When Oprah asked Meghan about the media’s claims that she made Kate cry before the royal wedding, Meghan replied with: “No, the reverse happened.”

She continues with the fact that she “didn’t want to be disparaging to anyone”. But Kate was “upset about something” over an issue with a flower girl dress. She also noted that the timing of the issue was especially upsetting as at the time she was stressing over whether her father Thomas Markle would be attending the wedding.

In the end her father Thomas was not able to attend the wedding after reportedly suffering a heart attack. Meghan said that she was baffled and “didn’t make sense” for Kate not to support her in the days up to her wedding.

In the end, Meghan wanted to emphasize that after everything, Kate did “own up and apologize” to her with a handwritten note and flowers. She said the Duchess of Cambridge “took accountability” for her actions and there was no further confrontation between the pair. She declined to go more in-depth as that is in the past and the two have made amends.

READ NEXT: How Prince William Stopped The Media From Harassing Kate