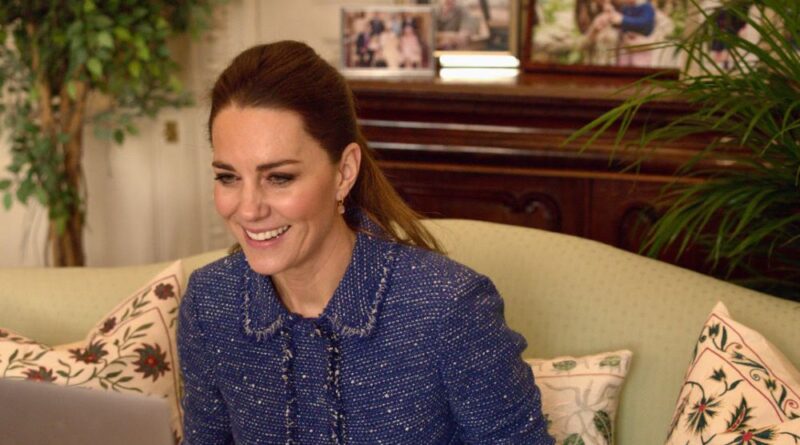 In her most recent engagement, the Duchess of Cambridge caught the fans attention with a new arrangement of personal photographs in the background of her video call chats.

This comes after the Queen allowed Kate and William to work over at her Sandringham mansion, and since then the Duchess has been doing all she can do to make space look more homely and personal.

In the background of her latest engagements, fans saw photographs of all her children. The first is from Princess Charlotte’s christening in 2015, alongside Prince William and Prince George, the Queen, Prince Philip, Prince Charles and Camilla.

The second photograph is of Prince Louis as a toddler, back when Kate opened her Back to Nature Garden at the Chelsea Flower Show in May 2019. Another photograph features Prince George and Princess Charlotte as his younger sister joined her brother for her first day at school in September 2019. The final photographs are of Prince William peeking into a land rover while in Africa.

During the video call, Kate showed her unending gratitude to the teachers, describing them as a “lifeline” for the parents for the work they do during the pandemic. Kate met with four teachers, having a one-on-one with each, from the Ribbon Academy, County Durham, which has been teaching key workers children and helping home learning.

The school has joined up with mental health charity Place2Be, which gives counseling and mental health support for pupils and children.

Kate is actually a patron of the charity, so the Duchess celebrated emotional support during the pandemic with headteacher Ashleigh Sheridan. She said: “I just wanted to check in with you, obviously you are doing an amazing job at the moment supporting kids.

“I know the school is open supporting key workers and things like that but I was wondering how are things? How are you getting on?

Ms Sheridan said: “We are good. Of course, we can’t replicate what is going on in school entirely because that would be impossible but trying out very best to make sure everything is as good as it can be.”

Kate replied: “I think everyone can recognise that schools are doing an amazing job, as parents as well you really recognise what a vital role you do play for us on a day to day basis.

“Having remote learning going on as well be hugely challenging to juggle both for a school as well.”

Place2Be’s main goal is giving counsel and emotional help both to children and teachers-a need for which has never been higher during these trying times of pandemics and lockdowns-with Kate saying: “They are an amazing organisation, hugely passionate about the work that they do.”

READ NEXT: Prince George To Honour The Queen When He Takes Over The Throne