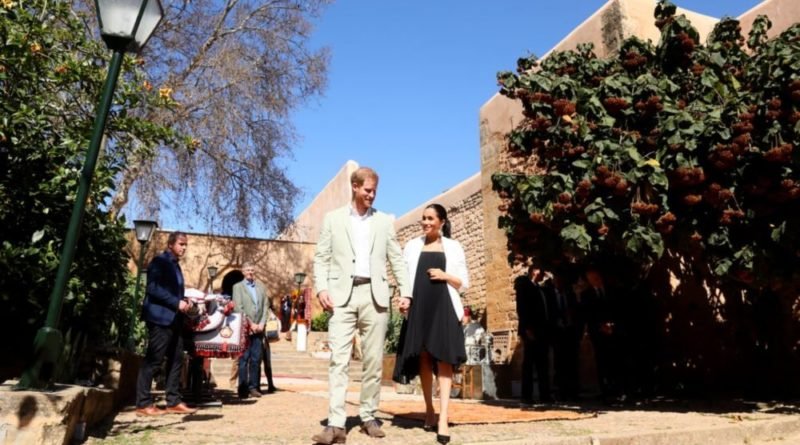 The Duke and Duchess of Sussex are coming to the end of an official three-day visit to Morocco.

They landed at Casablanca Airport on a commercial flight from London on Saturday evening.

And today, is their final day.

After the couple spend the morning the morning visiting an animal therapy center and watching a cooking demonstration, they visited the Social Entrepreneurs event and market in the Andalusian Gardens. Meghan switched her jeans and t-shirt combo for an elegant pleated black dress and a cream jacket from Babaton. She wore the jacket first when she watched Harry at the polo last year.

Mom-to-be Meghan accessorized her look with a pair of Manolo Blahnik sling-backs (she was also spotted wearing them yesterday) and a pair of statement gold earrings by GAS Bijoux.

Harry and Meghan visited the Andalusian Gardens to hear about youth empowerment in the country from a number of young social entrepreneurs at a market. The royal couple had the chance to see traditional Moroccan arts and crafts on display in the walled public garden amid exotic plants, flowers and fruit trees.

Harry and Meghan were shown an array of craft stands, including ornate wooden boxes carved by Mustafa Dennouch.

He gave Meghan a necklace of cedarwood balls. Harry received ‘a magic box’ made from sandalwood which Harry at first tried to refuse. The couple was shown a photo of Prince Charles on display at the market.

“They were interested. They asked many questions. It was a great pleasure to see them,” Ismail Boudrous from the social enterprise says. During their visit, Harry and Meghan met entrepreneurs in Morocco who have started companies aimed at tackling the country’s social, economic and environmental problems.

During a conversation with Youssef Chaqor, who runs a recycling company called Eko-Geste, Harry said: “You need to put more pressure on the big companies.”

He said that while big companies might give money to environmental projects, “they are still producing single-use plastic bottles. The parents-to-be vowed to return to Morocco with their baby after sampling a selection of classic national dishes.

Top chef Moha Fedal, who hosts the North African nation’s version of Masterchef told the couple: “I hope to cook for you next time,” as they joined him for a cookery demonstration with underprivileged children in the capital Rabat. Chef Fedal said: “You come with your baby to Marrakesh next time” referring to the fact that the prince visited his restaurant in the city back in 2018.

Meghan said: “We would love to.”

“Come with your baby and I will cook for all three,” he told Harry.

READ NEXT: Meghan Makes Surprising Confession On Trip To Morocco With Harry 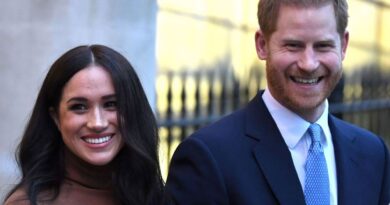