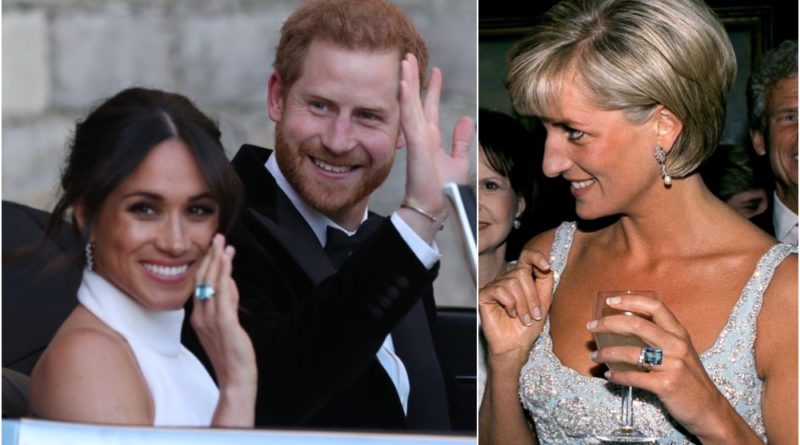 First, Prince Harry placed on her finger a simple Welsh gold band at the ceremony. And for the evening reception, he also gave his bride a striking aquamarine cocktail ring. And the ring has a special significance: it belonged to his mother, Princess Diana. The new Duchess of Sussex wore the ring on her right hand as the pair travelled in a silver blue Jaguar E-Type Concept Zero to the English country house.

Princess Diana wore the emerald cut Aquamarine stunner to an auction of her own clothes at Christie’s in 1997. The jewel is part of a set — the other piece is an aquamarine bracelet, where it’s connected by five strands of pearls. She wore both to a gala dinner in Australia in 1996.

However, it is still unknown whether Meghan was given the rest of the pieces in the set.

And yes, there were a lot of speculations that Harry will give Meghan something from his mother’s collection. At the end, it’s a tradition.

Prince Philip gave Queen Elizabeth II a diamond bracelet. The bracelet was made from stones from his mother’s tiara. Also, it was said that William gave Kate too a pair of his mom’s sapphire and diamond earrings that were remodeled specially for Kate.

The Duke and Duchess of Sussex depart Windsor Castle for a reception hosted by The Prince of Wales at Frogmore House, in a silver blue Jaguar E-Type Concept Zero. This vehicle was originally manufactured in 1968, and has since been converted to electric power #RoyalWedding pic.twitter.com/hRrxEUlFlJ

And also, both Kate and Meghan’s engagement rings are connected to Princess Diana. Kate’s was Diana’s iconic sapphire ring. When it comes to Meghan’s, Prince Harry designed it and it features two diamonds from Diana’s collection. Markle’s engagement ring also includes one stone from Botswana, where the couple holidayed.

Prince Harry and Meghan Markle found many ways to pay tribute to Princess Diana on their wedding day. The flower arrangement was filled with branches of beech, birch and hornbeam, as well as peonies, foxgloves, and one of Diana’s favorite flowers — white garden roses.

Meghan’s “something blue” were also her shoes. They are by Aquazurra and the soles are baby blue. Prince Harry and Meghan Markle are completing their big day with an evening reception at Frogmore House. Prince Charles is hosting it and includes only their closest friends and family members, around 200.

READ NEXT: Everything You Need To Know That Happened At The Royal Wedding Reception!