Prince George is no longer a shy, little preschooler with chubby cheeks you want to squeeze. He has grown up into a big boy, well-mannered and also perhaps settling into his royal role with less reluctance.

And in photos shared over the weekend Prince George seemed much taller, royal fans noticed. The young Prince and his family stepped out on Friday evening at the London Palladium for a holiday performance of a classic British pantomime show.

When it comes to height, Prince George appears to be taking after his parents. At 6ft 3, Prince William is one of the tallest members of the royal family. Duchess Kate stands at 5’9. So it appears that George is catching up quickly.

While the royals have not officially released information on the prince’s height, it is thought that Prince George, seven, is currently approximately 4ft.

Royal fans were quick to comment the gains the young Prince is making.

One user said: “Such a beautiful, close family. I cannot believe how tall Prince George is getting.”

They added: “Is he already up to Prince William’s waist?”

Another said: “Princess Charlotte wasn’t in the mood of holding hands!

“She’s a big girl now! And Prince George is mega tall for his age! And Lou Lou is the Boss! How come I didn’t see this before!”

Meanwhile, Prince William revealed that some of the jokes from the panto show went over son George’s head. He made the revelation to the show stars Julian Clary, Nigel Havers and Elaine Page, who got to meet Prince William backstage.

Havers told the Mail: “Prince William had us all chuckling when he said that his eldest, George, had innocently enquired why everyone was laughing at one of Julian Clary’s more risque jokes.

“He said it may take him a while to explain his way out of that one!” 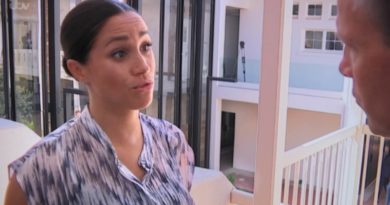