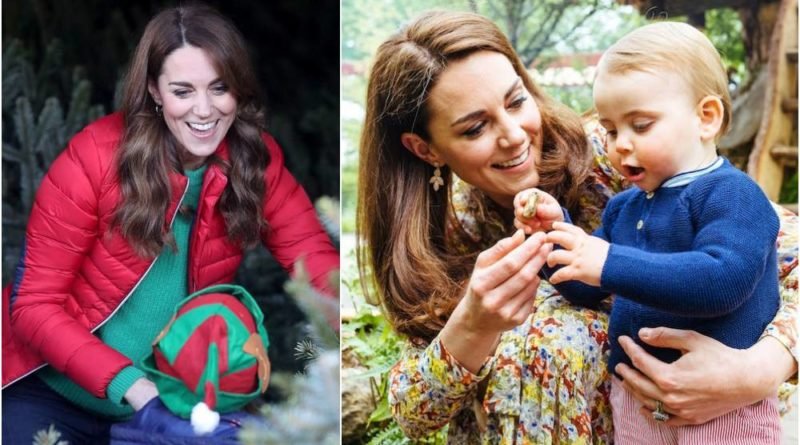 Kate visited Peterley Manor Farm where she met with families who are supported by the charity. Talking with them, she began laughing at a young boy who tried to get her attention by waving his hand in the air and shouting, “Me, me.”

Kate then revealed that her son Louis does the same. She said: “You remind me of my little Louis, he keeps saying ‘Me, me, me,’ and he wants to come everywhere with me.”

With her children never far from her mind, Kate also mentioned her eldest Prince George, during her visit. Before leaving, she crouched down to let some of the children smell the bunch of roses and thistles she was given.

Pointing out the thistles in the bunch, Kate, told them: “George loves thistles, really spiky ones.”

The Duchess appeared in good spirits at the farm this afternoon, as she joined families in the farm’s Elves Enchanted Forest, where the children were making holiday decorations and eco-friendly reindeer food. She also helped them to pick Christmas trees for Family Action pre-schools.

Kate also shared a meaningful moment with 26-year-old single mum Toni Law, who said that Christmas could be a “stressful time” because of the pressure to make it special for your children.

Kate said:  “It is stressful, you want to give them the opportunities to enjoy all aspects of it.  There is a lot of pressure that Christmas has to be perfect.”

Law later said of her chat with the duchess: “She said, ‘You’re doing a great job as a mum’, and I told her she did an amazing job as a mum.”

READ NEXT: Why Kate’s New Patronage Has A Big Meaning For Her

Kensington Palace Announced An Important Visit For Harry And Meghan

Everything We Know About Prince Louis’ Christening