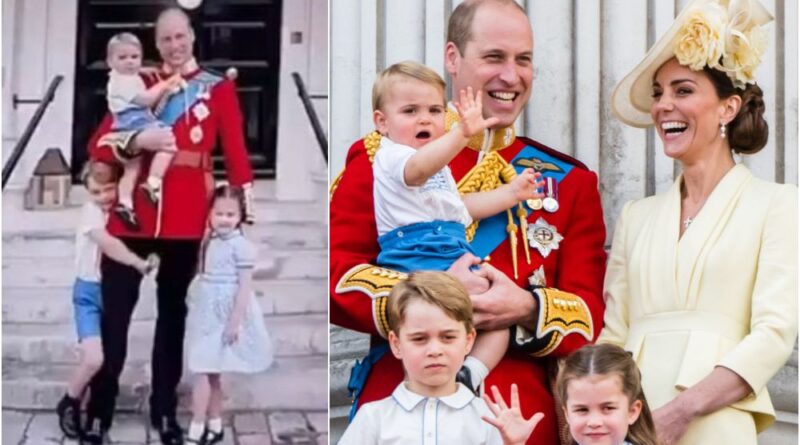 Duchess Kate has released a never-before-seen photo of Prince William and their three children. The photo was a part of a clip to mark Father’s Day, posted on the couple’s official Twitter account.

The short video also featured photos of the couple’s fathers, Prince Charles and Michael Middleton, along with their own children.

While we have seen most of the photos earlier, fans were delighted to see the extra photo that hasn’t previously been shared with the public.

Prince William and the kids were pictured standing on the steps of their home Kensington Palace. William looking smart in his military uniform can be seen hoding their youngest child Prince Louis. Meanwhile, Prince George and Princess Charlotte are standing next to them, coordinated in blue outfits.

It is believed that the heartwarming photo was taken at Trooping the Colour 2019 as the Duke of Cambridge is dressed in his military regalia from that day.

Fans quickly showed their appreciation for the sweet video. One fan wrote: “it’s the trooping photo for me 😍🥺❤️.” Another added: “Happy Father’s Day!! Such lovely photos. Also pls give up the third photograph in HD”.

A third fan said: “What a fantastic man & Father, William has become. Your mother would be so proud of you as are we. Happy Father’s Day.”

William will no doubt enjoy some family time this weekend as he marks Father’s Day but also gears up to celebrate his 39th birthday. Duchess Kate will likely “pull out all the stops” to ensure Prince William feels appreciated on his special day.

“She’s very much like her mother Carole in that respect. She’ll be aware that this year has been tough for William and will want both his birthday and Father’s Day to be special for him.

“Kate keeps William very grounded and she likes to show how important he is to her and the children.

“Especially after everything they’ve been through this year. It’s only brought them closer.”

It is expected that William will spend the day at Kensington Palace with wife Kate and their children Prince George, seven, Princess Charlotte, six, and Prince Louis, three.

READ NEXT: The Reason Why Kate Might Not Attend Princess Diana Statue Unveiling

Princess Charlotte Surprised With A Present At Buckingham Palace