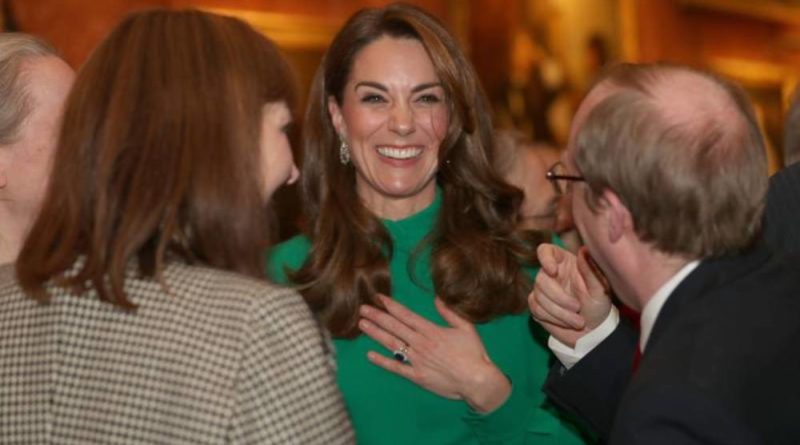 Tuesday evening was a very big night for the royal family! The Queen hosted a reception for NATO leaders and their spouses and partners at Buckingham Palace to mark 70 years of the NATO alliance.

A handful of senior royals welcomed dignitaries—including Donald and Melania Trump—to Buckingham Palace for a reception in the late afternoon.

Among the attendees was the Duchess of Cambridges, mingling with world dignitaries tonight. She wowed in a green Emilia Wickstead dress featuring a high pleated neckline and puff sleeves for the high profile occasion. She added some sparkle to the ensemble with a pair of dangling diamond earrings.

This is the second time in a month Kate has worn a dress by the New Zealand based designer. In November she wore a cobalt blue dress by Emilia Wickstead to attend the launch of the National Emergencies Trust.

Other royals in attendance included Prince Charles and Camilla, Duchess of Cornwall, who joined the queen in formally welcoming the NATO leaders and their partners.

Prince Edward, Princess Anne, the Duke and Duchess of Gloucester, and Princess Alexandra were also present to welcome guests in the State Rooms of Buckingham Palace.

Notably absent from the reception is Prince Andrew, who has stepped back from public life in the wake of his bombshell interview about his friendship with convicted sex offender Jeffrey Epstein.

Prince William also missed the reception as he is on a solo trip to Kuwait and Oman.

Two royal family members who are also not in attendance are Prince Harry and Meghan. The couple is currently enjoying a break from royal duties.

This is the second time that Kate and generally the British royals have hosted the Trumps in a year. She attended a banquet honoring the president’s state visit to the U.K. in June this year.