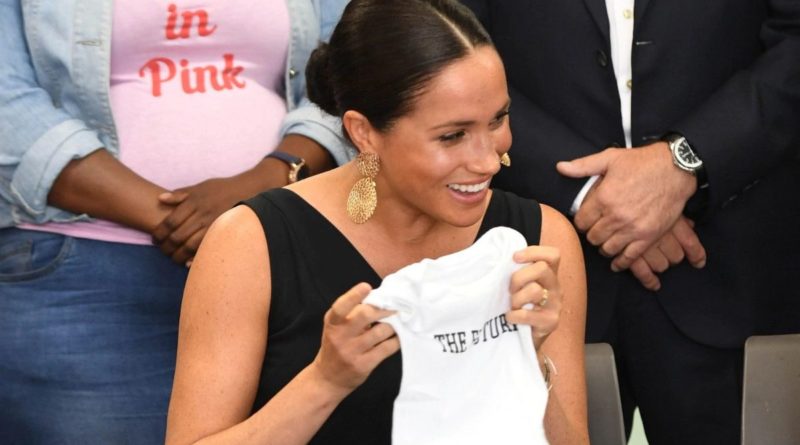 As promised. The Duchess of Sussex paid a visit to a charity supporting mothers with HIV, called mothers2mothers, located in Cape Town, and she held up her promise to bring gifts for them. Meghan brought with her a large black holdall full of baby clothing that her son Archie has already outgrown, as well as from children of her friends. Baby Archie sure is growing fast, being only 5-months-old but already outgrowing his clothes. Among the items, there were two tiny white vests, one bearing the words The Future and another with the Invictus Games logo.

“Here are a few little things that I thought would be helpful,” she said, holding them up one by one. “The Future. And he’s outgrown his Invictus one,” she laughed.

The Duchess has gifted something in return, a sweet framed photograph of women helped by the organization. After receiving her gift, she said: “I just thought that, in the spirit of community, what’s so nice is to be able to share some of the things that we have at home as well. And so we can obviously make sure everything you need is provided for you, but we’ve brought some of the things that my friends and I used for our kids and Archie, that don’t fit anymore.”

Gesturing to the bag, she added: “There are all sorts of things there. It’s so important to be able to share with other families…you’re all in this together and with each other and so we just wanted to share something from our home to each of yours.”

She enjoyed everyone’s company, especially a 15-month-old girl called Asivile, who was carelessly just rolling around on the floor in front of the royal, with Meghan remarking: Look at who’s having the best time, living her best life!”

READ NEXT: Meghan Steped Out For Her First Solo Event On South Africa Tour

The Duchess melted when she saw six-week-old Sumeya, who was asleep on her mother, Nothabo Qaga, 31. The fan told her that she watched the royal wedding on TV, with the Duchess replying: “Oh thank you, that’s so sweet.” Meghan was caught off guard for a second when Nothabo suggested that baby Sumeya might one day marry Archie, but she quickly retaliated with a sweet giggle.

“I was so excited, I can’t believe it even now,” said the mother-of-two from Cape Town’s Khayelitsha township. “It’s like a dream to see her, especially because I watched her wedding on TV. I told her that maybe Archie and Sumeya are a match made in heaven. I was disappointed that she didn’t bring him too.”

Meghan’s visit to the mothers2mothers’ international headquarters in Cape Town in order to check up on the charity and how it was training and employing women living with HIV as health workers in their communities across eight African nations. They have something called a peer-support model, that helps prevent mother-to-baby transmission of the virus through these “Mother mentors”, who become role models in their communities, showing how women with HIV can live healthy, productive lives. The whole project started back in 2001 and since then it has created more than 10,000 jobs and reached to more than 11 million women and children under the age of 2.

Meghan was welcomed to the centre by Frank Beadle De Palomo, President and CEO of mothers2mothers and two spokeswomen, Limpho Nteko, 29, from Lesotho, and Nobuntu Ma-awu, 32, from Khayelitsha. The Duchess, along with staff from the charity and clients were seated in a circle of seats as they talked about the charity. But as time passed Meghan recommended that they move to the floor, where a selection of plaything was laid out for the youngsters.

“We can all sit down here, I just think if it was Archie and we had all these toys in the middle but I made him sit in the chair it would be so unfair!” When her hosts hesitated, she urged them on, laughing, “I can’t be the only one sitting down here.”

Meghan made herself comfortable seating cross-legged on the carpet, teasing a baby girl right next to her as Limpho, a woman helped by the charity, shared her story. Hearing that she had a daughter aged five months, “almost the same age as baby Archie”, Meghan gasped, “Oh my goodness!” She was shocked when Limpho revealed that she was 19, pregnant and married to a man seven years older than her when she was diagnosed with HIV.

“Did you feel scared?” asked the Duchess. “Scared, ashamed and it was just terrifying,” she replied. “One of those moments when you just want to disappear.” Only with the help of mothers2mothers did Limpho realise that she could continue to live a healthy life and managed to deliver an HIV-free baby. Unfortunately, she finished her story by revealing that after three weeks, despite everything, her baby passed away. Meghan was shocked after hearing this, managing to reply only with: “I’m so sorry.”

READ NEXT: The Reason Why Meghan’s Not Wearing Her Engagement Ring On Royal Tour


Ever since then Limpho went off to give birth to two healthy children. After receiving help from the charity she wanted to give back, so she became a Mother Mentor herself and is now helping to train others. When she explained how they move around the community with door-to-door visits Meghan replied: “That’s so important and I think that so much of the key work that’s being done is you have your own community. Mother mentors, someone who looks like you. It’s a safe place for you to have that conversation with someone you trust. Because we can do whatever we want from the outside looking in, but when you have a role model with a shared experience it creates a much faster connection and it’s great that you’re able to do that.”

The role of a Mother Mentor is to bring financial security for their families and become role models as healthy, HIV positive women, to help reduce stigma and discrimination around the virus. They work in communities and at understaffed health facilities to make sure that women and their families get the best health advice, treatment and medication they require. One of the great successes of the charity is achieving virtual elimination of mother-to-child transmission of HIV for enrolled clients for the past five years in a row.

Besides their headquarters in Cape Town, the organization also has affiliated outlets in New York and Los Angeles and a UK HQ based in London. Other notable celebrities have also bee affiliated with the charity. One such is Annie Lennox, ho appeared with the Duchess in a panel discussion on International Women’s Day and Hollywood star Salma Hayek, who appeared in the September issue of Vogue guest-edited by the Duchess. South African supermodel Candice Swanepoel, actress Samantha Bond and TV and radio host Rochelle Humes are also patrons.

Earlier on Wednesday, Meghan visited female entrepreneurs at the Woodstock Exchange in Cape Town, where she said she found juggling being a royal and looking after baby Archie “a lot” but added, “it’s all so exciting.” The former actress met several women who have set up their own businesses in industries such as technology, conservation and fashion and praised them for “empowering the next generation” of creative minds.

Speaking to mum-of-two Lara Rosmarin, CEO of Cape Innovation and Technology, Meghan said: “It must be a lot to juggle. We’re only five months in right now. Being a working mum and travelling as well with a baby, my goodness it’s a lot, but it’s all so exciting. There are days when it’s a lot to juggle but then you meet someone and you have an impact on them and you say ‘ah-ha’, and it’s so rewarding.”

Lara said: “I think the Duchess really understood to pressures on working women which was so appreciated. She is a working mother herself and mixing that in with all the travelling and projects she has, it’s inspiring for other women and young people to see that she is making such a success out of her life and helping others with her charitable endeavours.”

READ NEXT: Meghan Has The Cutest Nickname For Her Son Archie