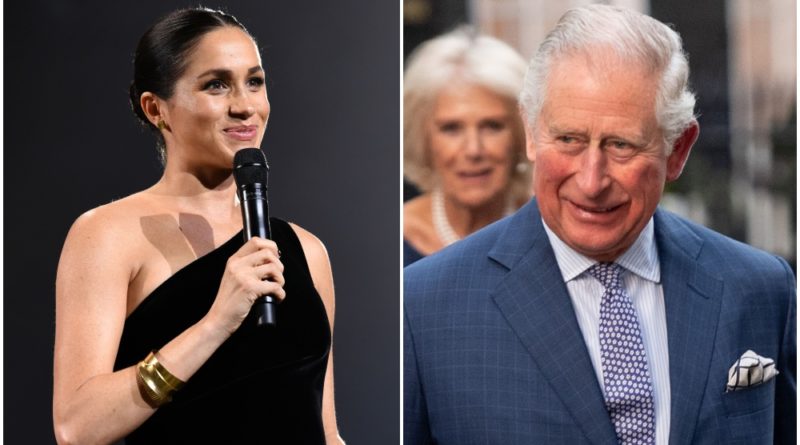 Meghan surprised the media with a unexpected appearance at the British Fashion Awards.

She completely wowed the audience in an elegant one-shoulder black gown by Givenchy while she presented the award for British Designer of the Year-which went to a close friend of hers-but there is another thing that fans noticed.

And that is the subtle nod to Prince Charles in her look.

The Duchess of Sussex finished off her look with gold strappy heels and gold bangles by Pippa Small to go with her black velvet gown. She also wore a pair of Nosheen Stud earrings by the same designer, worth around £50. The Sun’s Royal correspondent Emily Andrews said: “What I thought was interesting was her jewelry by Pippa Small.

“Her bangles and stud earrings were made by artisans of the Turquoise Mountain Foundation in Afghanistan, a charity that helps those in conflict areas and is supported by her father-in-law Prince Charles.

“Meghan wants to wear jewelry and clothes that are both fabulous and have a social conscience.

“And by wearing it at such a high-profile event as last night, she’s ensuring her choices make a difference. Charles will be chuffed!”

She also went with a dark manicure to match her floor-length black dress, which is actually a no-no from the royal family. Women of the royal family usually wear natural colored nails, often favoring the Queen’s personal favorite shade, Essie Ballet Slippers.

It has been reported that the Queen is not a big fan of colorful nail polish, and it break “royal protocol” to have anything other than nude.

Emily confirmed that her nails were perfectly appropriate, and said: “There are no rules on what nail polish female royals can wear, it really is a matter of taste.

“Meghan was at a glitzy fashion awards do, dark nails are very in at the moment and so they matched her dress.”

According to rumors, the Queen is a strict follower of the rule, as she has allegedly been wearing the Ballet Slippers polish since 1989.  The brand’s website states that Queen Elizabeth’s hairdresser wrote to the brand’s owner, nail polish-mogul Essie Weingarten, asking for a bottle of the light pink polish as she didn’t want to wear any other. The subtle shade fits right in with the Queen’s many bright outfits and gloves and Kate Middleton has also become a firm fan.

Something that was in the forefront and easily noticeable for the entire night was Meghan’s baby bump, which showed off in the figure-hugging bespoke dress – designed by Givenchy -while the Duchess wore her hair slicked back in a signature bun.

The Duchess took to the stage to present the award for British Designer of the Year to Clare Waight Keller for Givenchy. She is a close friend of hers and the person who designed her wedding dress. (along with Hollywood A-lister Rosamund Pike) The Givenchy designer thanked the Duchess of Sussex personally in her speech and said: “This woman is so amazing.”

Speaking of their close working relationship, Clare added: “I got to know Meghan on a personal level.

“To have someone like that trust you on such a personal moment in their life… I can’t thank you enough because it was the most beautiful moment.”

READ NEXT: The Reason Why Meghan Always Cradles Her Baby Bump