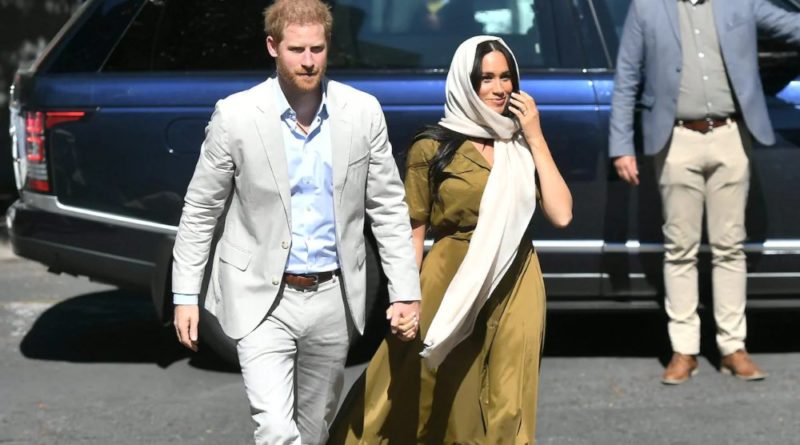 For the event, Meghan changed out of her casual denim outfit from earlier, into a floor-length dress with the cream headscarf.

The aim of their visit is to promote understanding between the faiths. They will meet young people who have taken part in programmes to help them “develop respect for people from different religions, faiths cultures and backgrounds and an appreciation of the value of diversity”.

On the arrival at the Auwul Mosque, Harry and Meghan were greeted by Imam Sheikh Ismail Londt and Muslim community leader, Mohamed Groenwald.

They will introduce the couple to faith leaders, and invite them to view the first known manuscript of the Qu’ran in South Africa.

Then, the royal couple will meet with the group of faith leaders, including a representative of the Church of England, the Chief Rabbi and Jewish, Christian and Muslim youth leaders, as well as students who participated in the London-Cape Town interfaith exchange.

Harry and Meghan also met Father Lapsley, a local Anglican leader. Born in New Zealand, he moved to South Africa to campaign for equal rights during apartheid. In 1990, he received a letter bomb in the post and lost both hands in the blast.

According to the HEA Islamic Studies Network funded ‘Guidelines for the study of a local Muslim community’ project carried out at the University of Wolverhamptom, the Duchess wore the head covering as a sign of respect.

The document said: “Head covering is required for males and females, Muslims and visitors.

“Females would usually wear a scarf and males a hat or cap. This is a requirement for many religions and is linked to the respect that many religions would expect visitors to show.”

The Bo-Kaap Civic Association’s Mohammed Groenewald said the visit by the British royals is aimed at sharing more information about Islam.

“We will be having an interfaith event inside the mosque and that is just to tell them that Islam here, isn’t borrowed from anywhere else in the world. Islam is part of the fynbos species of the Cape. Islam has grown organically from slavery, from political prisoners that all came here together and the message we want to send to them is that the type of Islamaphobia Europe is experiencing, here we live in peace and harmony and we have a shared culture.”

READ NEXT: Meghan Opened Up About ‘Parenting’ With Harry At Monwabisi Beach

Why George Could Go To Less Traditional School Than His Dad William?