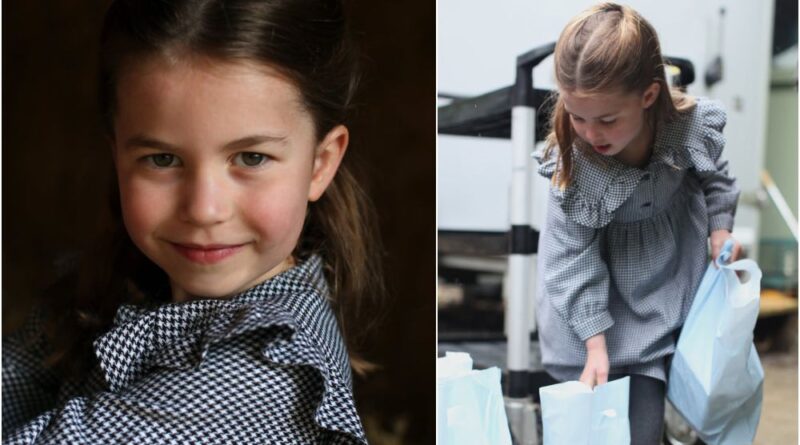 To ring in her big day, the Palace took to Instagram and Twitter to share new photos of the birthday girl, which were taken by mom Kate.

The photos were taken earlier this week on the Sandringham Estate. They show Princess Charlotte delivering food packages to isolated pensioners who live near her Norfolk home.

The birthday girl looks super cute in a checked dress by ZARA.

Candid, birthday portraits have become a tradition for the royal family. Mom Kate has gotten behind the camera since Princess Charlotte first birthday photos.

The little princess’s birthday will be spent at the family’s country estate, Anmer Hall, privately where there will be a small family celebration.

It was reported that Prince William and Kate are organising a video call party so Charlotte can spend time with her family and friends.

“Then, they have put together a full plan that will give her all the fun of a birthday – including cake and games – despite the extraordinary circumstances we are faced with.”

“Her great-grandmother will be joining the family call on the big day.

“As far as Charlotte is concerned, the important part is that her whole family are by her side to say happy birthday.

Princess Charlotte hasn’t been seen in public since she joined the royals on Christmas Day outing. But, we also caught a glimpse of the little lady last week when she and her family joined the Clap for our Carers movement.

Princess Charlotte was born at was born at 8.34am, on May 2, 2015, at St. Mary’s Hospital. Two days later, Prince William and Kate announced they would name their girl Charlotte Elizabeth Diana. As the second child of the couple the Princess is fourth in line to the throne.