We are used to seeing Prince George and Princess Charlotte at official engagements, accompanying their parents Prince William and Kate. But a new candid video of the little royals cycling around Kensington Palace has prompted delight among royal followers.

The sighting was reported by a fan account on Twitter, alongside a video of the brother and sister riding their bikes. The video shows Princess Charlotte passing with her bike and wearing a pink helmet. Right after she is big brother George wearing a blue helmet.

Riding bikes is a normal thing for many children. Still, it’s quite impressive that both George and Charlotte are already pros on their bikes.

This is not the first time we have seen them with their bikes. In July 2018, the siblings were spotted playing cycling in Hyde Park. What’s more, they were riding on two-wheeled bikes without stabilisers. Usually, by the ages of 4 or 5, children have developed enough coordination and balance to ride a bicycle without stabilisers. At the time, George was five and Charlotte three years old.

George and Charlotte were also accompanied by their nanny Maria Teresa Turrion Borrallo.

In the past, while Kate was attending a cycling-themed festival during her official visit to Luxembourg, she talked to many cyclists.

She met professional cyclist Frank Schleck, who later revealed: “We talked about how really appreciate riding a bike.

“For kids, it’s great because they can exercise and – as long as it’s safe – go to school without their parents.

“She said their kids have bikes and that they’re always excited about trying to ride.”

William and Kate are very hands-on parents and encourage their three young children to spend as much time outside as possible. Kate has revealed many of the fun activities she likes to do with her kids, including hunting for spiders in the garden and building dens. 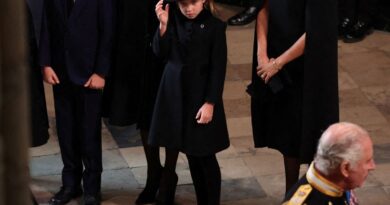