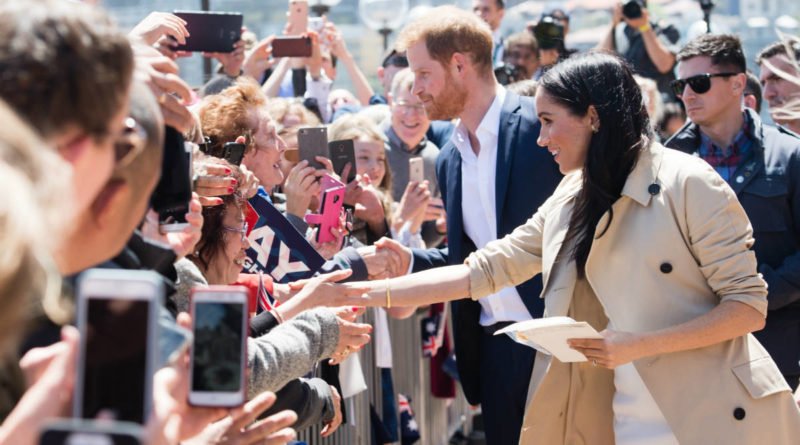 Harry and Meghan are currently touring their first major royal trip together, which started just as the couple announced the news about their first child.

At the end of the third day, the Duke and Duchess of Sussex prepared to leave Melbourne.

At the airport, they were seen off by the Governor of Victoria Linda Dessau. And in the picture, shared on the Governor’s official Twitter page, some noticed an interesting detail about Meghan. She can be seen clutching her mobile phone as well as her bag.

Farewelling Their Royal Highnesses The Duke and Duchess of Sussex from Victoria. Thank you for visiting.@KensingtonRoyal #royalvisitaustralia #Melbourne pic.twitter.com/m0yr56iNxI

The phone is likely to be an Apple iPhone X, judging by the look of the camera on the back.

After the photo, some were asking whether Meghan is breaking any royal protocol by doing this. But, the answer is: NO!

The members of the Royal family are allowed to have mobile phones. Still, it is not usual to see them with them in public and during royal engagements.

It is said that the Queen also has one with her all the time. Prince William and Kate have also admitted earlier that they’re on their phones a lot.

The Royals have mobile phones, but it appears that their phone numbers are also a major security issue. Not everyone has contact details for the Duke and Duchess of Sussex.

Meghan’s Suits co-star Patrick J. Adams has revealed that he doesn’t even have her new number. In an interview with Entertainment Tonight, the actor admitted that he couldn’t give relationship advice to his television wife, because he can’t just easily call her up.

“I don’t even have her telephone number anymore!” Adams admitted.

Those few people who have their numbers must have memorized them by a secret a secret code name in case it falls into the wrong hands.

A royal source has revealed to the Daily Star that the pair’s bodyguards refer to the royals as David Stevens and Davina Scott, respectively.

READ NEXT: Prince Harry Just Revealed One Of His Favorite Baby Names

Why William, Kate And The Children Won’t Return To London?