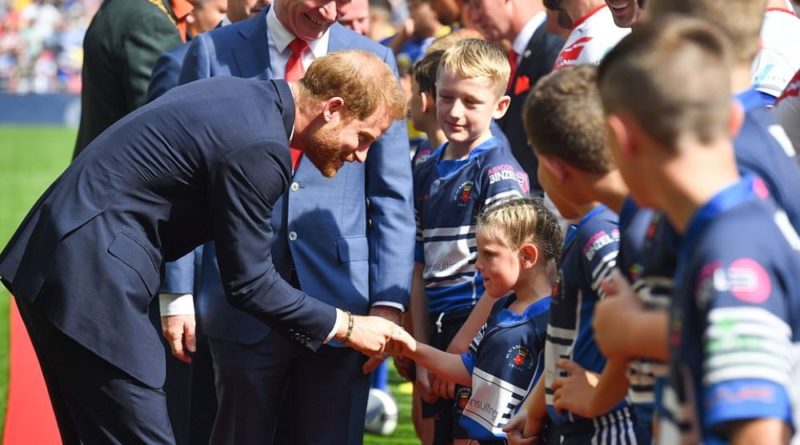 Prince Harry had a solo outing this Saturday when he attended the Rugby Football League Coral Challenge Cup Final at Wembley Stadium.

This public appearance comes after a relatively long period of laying low for the Prince, as he didn’t have much things planned during the summer months, spending more time with his family and even going on vacation with his wife Meghan Markle and their firstborn son Archie.

The Duke of Sussex went out to watch the final of the Rugby Football League Challenge, with St Helens and Warrington Wolves being the two teams battling it out for the trophy at Wembley Stadium, London, this Saturday.

Prince Harry, as always, quickly took the spotlight, especially when he took to the pitch where he met and shook hands with the players, children and mascots.

At the moment, the Duke and Duchess of Cambridge, along with a part of the royal family are currently in Balmoral, Scotland with the Queen. Prince Harry and Meghan couldnt join them due to this engagement.

But Harry isn’t the only one making engagements, as Meghan made a surprise appearance this week as well. The Duchess attended a photo shoot at Smart Works, a charity which supports women to reenter the workplace, to promote the capsule collection of work wear she helped to design.  A royal source has said that “Meghan surprised everyone at Smart Works when she showed up for the shoot,” with the Duchess being happy throughout the entire engagement. Royal fans were even treated to some behind-the-scenes footage on @SussexRoyal Instagram Stories.

For the capsule collection, Meghan enlisted a number of partners to help her, such as British department stores Marks & Spencer and John Lewis, the brand Jigsaw, and her close friend Misha Nonoo, who just so happens to be a fashion designer.

READ NEXT: Prince Harry And Meghan Share A Heartwarming Message With Their Fans