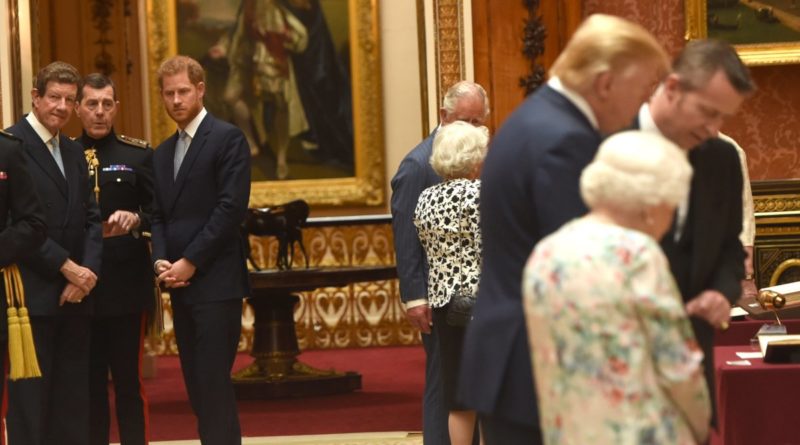 The President of the USA, Donald Trump has begun his three-day visit to the UK. His whole day has been meeting with important royals and officials. He met with the Duke of Sussex, Prince Harry, who helped to show the Trump family around Buckingham Palace after lunch between the Trumps and the Royals.

The young royal was seen accompanying the President’s daughter Ivanka on a tour of the Royal Collection. Harry didn’t seem very excited to be there and didn’t appear like he wanted to hang around as he soon peeled off from the group and began chatting to a senior courtier instead. This is the first day of the three-day plan the president has for his UK visit.

Meghan Markle has been an outspoken critic of the President way before she joined the royal family. She was among those who said that they would move to Canada after Mr Trump took power. At least one kept that promise.

He even praised Meghan as an American princess and predicted that she will be a great success. The Duchess is absent from all these engagements as she is still on maternity leave and is at home at Frogmore Cottage with baby Archie.

There was some talk that she would miss out on the president’s visit because of her conflicting views to that of the president, but that is not confirmed. The first day of the visit will end with an evening banquet hosted by the Queen at Buckingham Palace with a huge guest list.

For tomorrow, the President has a meeting with Theresa May planned at 10 Downing Street, and then on Wednesday the President will attend D-day commemoration events at Portsmouth.

READ NEXT: Kate Pays Tribute To The Queen Mother And Late Diana At The Trump State Banquet

William, Kate, Meghan And Harry All Have More Freedom, And That’s All Thanks To Princess Diana