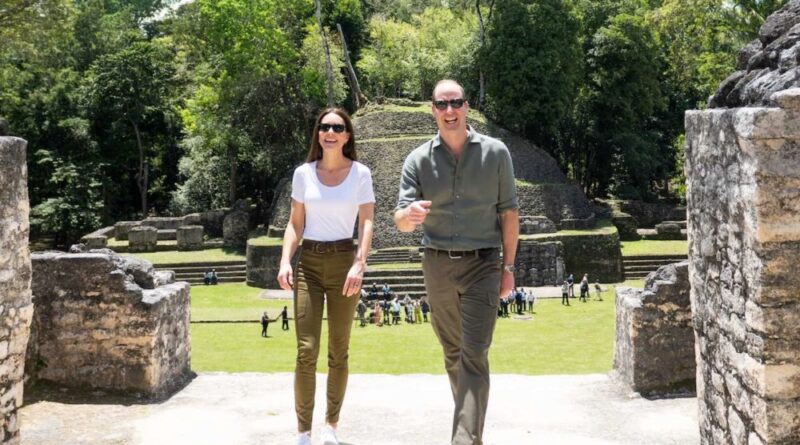 It’s day three of the Royal Caribbean tour and Prince William and Kate have visited Mayan archaeological site of Caracol deep in the Chiquibul Forest where they learned about the history and were taken to the stunning Caana. It’s their final day in the Belize before they head to Jamaica.

Caracol was inhabited as from 1200 BC but the most important events took place between the 5th and the 9th century AD.

For the occasion, Kate opted for a fitted white T-shirt and camouflage jeans, while William matched her in a sage green shirt and similar chinos to his wife’s.

“What you are seeing here is like the inside of Buckingham Palace,” Moore, associate director of the Institute of Archaeology (NICH) Belize, explains.

“People often like to try and run up here,” Mr Moore said. “What, they race?” exclaimed William. “You must be very fit if you are doing this three times a week Allan!” he added.

Later, Prince William and Kate took “a trip down memory lane” when they, spent time with BATSUB (British Army Training Support Unit) in the jungle, which gives tropical environment training to British troops and international partners.

In 2000, during his gap year Prince William as the guest of the British Army Training Support Unit, BATSUB, was learning the art of jungle warfare with the Welsh Guards Regiment as part of Operation Native Trail.

The last engagement of the day will see the couple attend a reception hosted by the Governor General of Belize at the Maya ruins at Cahal Pech, near San Ignacio.

How Kate Paid Tribute To Diana At Archie’s Christening