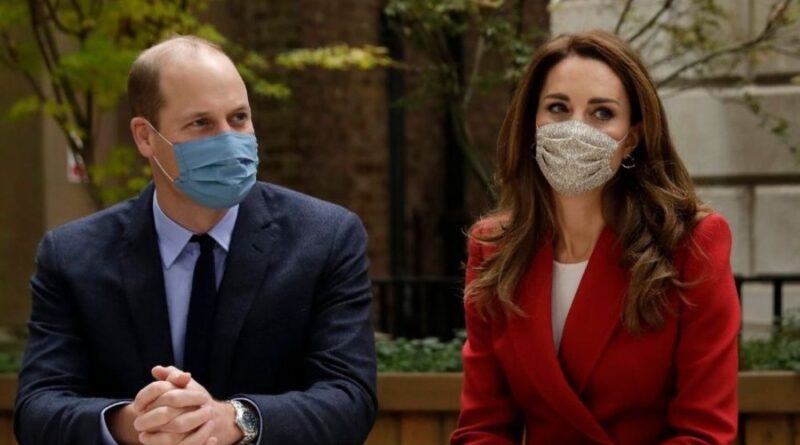 The Duke and Duchess of Cambridge met with some of the 100 finalists from the Hold Still project, which had the applicants capture both everyday and special moments in the UK during the lockdown. The chosen 100 entries will be on exhibition in 80 towns and cities across the UK.

Sami, who volunteers at a community Food Hub in Hackney, revealed that he wasn’t aware that the picture had been submitted by one of his colleagues, only finding out when he got a call from the National Portrait Gallery.

He said: “The Duchess called me a few weeks ago and we had such a lovely conversation. She told me how she wanted to build a snapshot of how Britain was coping in the pandemic, but to show all sides of what people have gone through and are still going through.”

Sami is visiting the UK until October as he is studying for a PHD in London. He continues: “The Duchess came across as really caring and dedicated, I was so impressed she took the time to call me.

“I told her about the work they do at the food hub, and she agreed it’s such a vital project. I was lucky enough to help out there for a couple of months, but they always need help throughout the year.”

The two royals also made a visit to St Bart’s Hospital where they met with Joyce Duah, who is the one behind the photograph “All in this Togeter”. Joyce, who is a specialist oncology pharmacist by profession, photographed her colleagues Amelia Chowdhury and Dipal Samuel, who were drafted in to work as pharmacy technicians in the Intensive Care Unit.

The image was taken by Joyce at the height of the COVID-19 crisis earlier this year. It shows her colleagues writing their names, smiley faces and love hearts on their disposable PPE aprons.

The Duchess said: “Thank you so much for the image. It had such an impact it captured the moment, it was a look behind the scenes. The story of what you experienced is so important.”

The Duke added: “It is important for history purposes to show that actually happened.”

Joyce, who had the job of shielding the patients in the hospital’s cancer ward, had this to say after her meeting with the royals: “I married photography and care together. I took a series of photos of them getting into and out of their PPE. I thought it was the most interesting aspect.

“It shows Amelia and Dipal writing their names with a marker on each other’s PPE because when a patient wakes up, they know our names. It was a very touching sentiment.

“Patients were often in a coma and so coming round confused and didn’t know who was treating them. But also we couldn’t even recognise each other at times without names.”

For this outing, the Duchess went with a long, red double breasted coat by fashion favorite Alexander McQueen, just perfect for this autumn weather. Underneath it she wore a white blouse, a black pleated midi skirt and heels, finishing off the look with a new Grace Han bag.

Kate, who is a lover of photography herself, launched the Hold Still project in May this year, in collaboration with the National Portrait Gallery, of which she is a patron. She was in the group of judges that had the hard task of choosing 100 finalists from over 31,000 entries and was the one who unveiled them in the National Portrait Gallery’s digital exhibition in September.

Starting today, the photographs will be showing up all over the UK, on billboards, bus stops, train stations and shop fronts for the next four weeks.

One of the portraits, “Melanie, March 2020”, which features NHS nurse Melanie Senior and taken by Johannah Churchill, has been recreated as a hand-painted mural in Manchester city centre.

All of the 100 finalists will be featured in the special exhibition hosted by the National Memorial Arboretum in Staffordshire from 23rd October. This exhibition is supported by the Co-op which launched “Co-operate” in April, which helps connect vulnerable people to local and national support initiatives and has recently provided emergency relief funding to 4,500 community cases.

READ NEXT: Why William And Kate Might Leave London Next Week