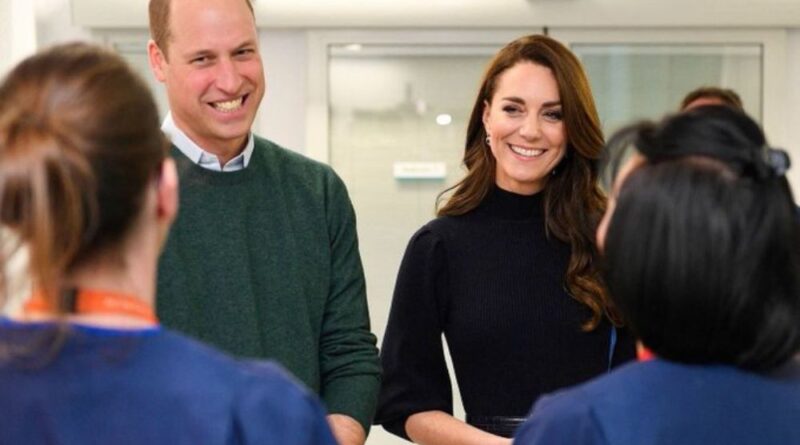 On Friday the Prince and Princess of Wales visited the Royal Liverpool University Hospital, with the two royals wearing matching blue tartan outfits for the occasion. Prince William even joked that their choice of outfit came after a moment of “wardrobe chaos”.

During their visit to the Merseyside the pair met with and thanked the healthcare and mental health support workers for their work, especially now during the winter months. Kate looked great as always in a blue and green tartan jacket, while Prince William wore a green and blue blazer in a similar tone to his wife.

While meeting with individuals at the hospital-such as healthcare workers, patients and other staff-Prince William was heard joking about their choice of outfits while talking to someone, saying that this was the result of a morning “chaos” over their wardrobe.

One woman exclaimed “you’re matching!” when she saw the couple, while it appeared that William replied with: “Yes I know, it was slightly like wardrobe chaos this morning.”

The woman then insisted the outfits were “coordinated”, to which he replied: “Coordinated, exactly!”

William and Kate’s outfits were the only two things matching, as King Charles was also seen today sporting a similarly patterned tartan kilt during his visit to Aboyne and Mid Deeside Community Shed in Aboyne, Aberdeenshire.

However this apparent coordination by the royals might have another meaning, as it comes after claims made by Meghan Markle that it is against protocol to wear the same color as more senior royals.

In one part of Netflix’s three-part docuseries ‘Harry & Meghan’, the Duchess claimed that she intentionally wore neutral tones while staying in the UK in order to avoid wearing the same color as other royals.

She also mentioned that she didn’t want to stand out with any of her outfits, saying: “It was also so I could just blend in.

“I’m not trying to stand out here. There’s no version of me joining this family and trying to not do everything I could to fit in.”

This engagement-filled day for the royal family comes days after the official release of Prince Harry’s bombshell memoir Spare, which was officially released on January 10th.

According to reports, the royals have told aides it is “business as usual” and sources so far have said that the senior royals will not be reacting to the tell-all memoir.

READ NEXT: Prince William And Kate Put On United Front For First Engagement Of The Year