The Duchess of Sussex is frustrated with some royal rules, especially a no tuxedo rule.

Being a royal isn’t easy, according to Meghan Markle, who has shown frustration with her new royal status, including a restrictive wardrobe.

The Duchess of Sussex has shown a particular liking for sharp suits and jeans in recent months, but Prince Harry has vetoed a Stella McCartney suit, due to it being too untraditional for their upcoming Australia tour.

READ NEXT: Why Meghan Was The Only Royal Not To Wear A Brooch For The RAF Celebration?

“Meghan is being told she needs to stop dressing like a Hollywood star and start dressing like a royal. Meghan wanted to wear a tuxedo-style suit but Harry said it wasn’t traditional enough,” a source told the Mail on Sunday.

Markle has been having a number of meetings with Kensington Palace’s “special projects team” ahead of their tour in New Zealand and Australia in October, which includes wardrobe consultations.

“It might also, perhaps, be a reminder of fashion rebellions by Harry’s late mother, Princess Diana,” the paper wrote, adding that it’s Queen Elizabeth who has the final say over the chosen attire. While Kate Middleton is a fan of more traditional attire, she was also told to wear longer hemlines and put weights in her skirts after she had a few too many ‘Marilyn moments’ in her early days as a full-time royal. 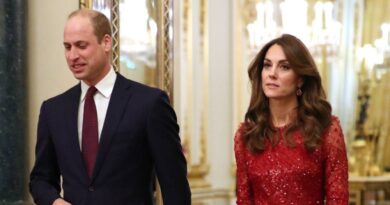