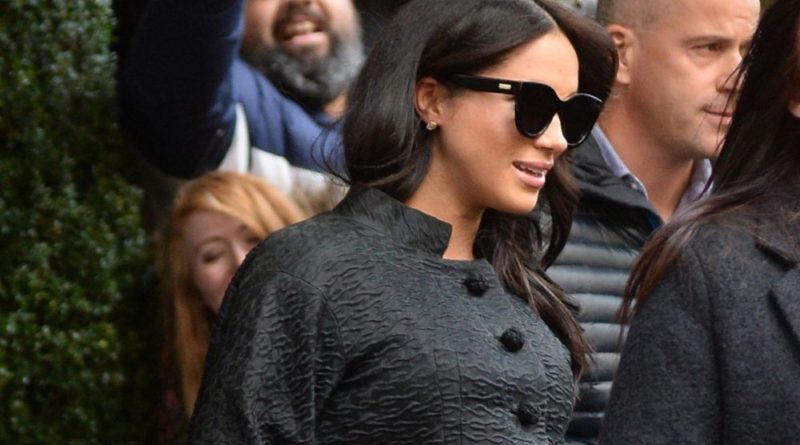 The Duchess of Sussex has flown to New York for a baby shower with her friends, and there was one incredible gift she received that was very hard to miss.

Duchess Meghan received a massive crib. The babyletto item was pictured being delivered to The Mark hotel, where the shower was held, carefully packaged in its box.

It’s a three-in-one convertible eco-friendly, Hudson crib, which comes in a range of colours and retails for £290. The description on babyletto’s website reads: “Delight in mid-century modern appeal with the Hudson 3-in-1 Convertible Crib.

“Featuring stylish rounded spindles and an open modern silhouette, the Hudson Crib is made with eco-friendly, non-toxic materials backed with GREENGUARD GOLD certification. An included toddler bed conversion kit allows you to seamlessly convert from crib to toddler bed to daybed.”

The Duchess was joined by 15 guests on Tuesday, the first of two baby showers with the second taking place in London later this month.

Abigail Spencer, who appeared with Meghan on Suits, arrived at the hotel holding a gift bag decorated with green and blue flowers. Meghan was pictured with her at The Surrey Hotel ahead of her lavish shower. Jessica Mulroney, whose children had important roles at the Royal wedding, is expected to have attend the shower. Friends reported to also be on the guest list include Serena Williams, Priyanka Chopra and Misha Nonoo.

Meghan looked stunning in a black coat and “Nearly Skinny Maternity” jeans by Hatch Maternity. She accessorized her look with dark Le Spec sunglasses, beige heels and a matching handbag by Carolina Herrera. Earlier that day, hundreds of pink roses were spotted being delivered to the hotel. This lead to some speculating that Meghan and Harry are expecting a girl.

One member of the team was spotted carrying an orange tree. In Eastern history it symbolises prosperity, happiness and luck.

READ MORE: Meghan In All Black Ahead of Her Baby Shower in NYC

Harry Revealed The Reason For One Of His Worst Speech Ever