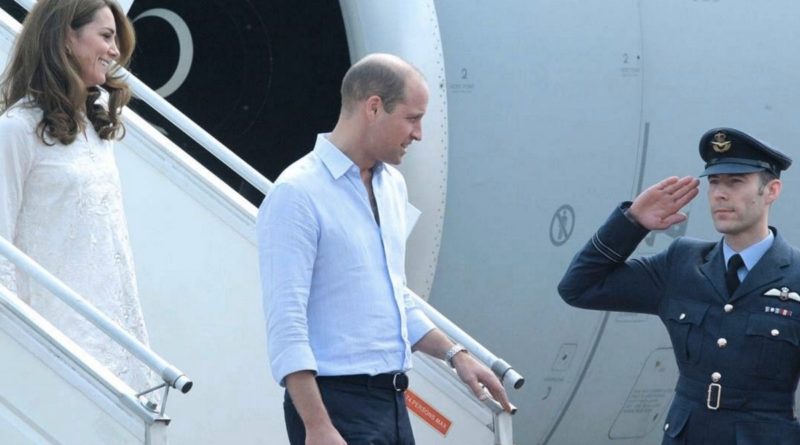 Prince William and Kate Middleton ran into some trouble on Thursday as their plane was forced to return to Lahore after being unable to land at the Pakistani Royal Air Force base due to a thunderstorm.

The storm caused some severe turbulence for the royal couple as they were returning to their initial take-off spot, with passengers describing the flight as terrifying, but it seems Prince William was unfazed. With his previous experience as an emergency pilot himself, Prince William was quite comfortable during the bumpy ride-however there is one small detail that annoyed him during the stressful journey. What could that be you might ask?

Nick Dixon, a royal correspondent for Good Morning Britain, who was on the plane with the royals, reports that the Duke went to greet the press pack after landing, joking about how he was upset that the turbulence had knocked over his vodka and tonic! Nick explained:

“We were travelling on RAF Voyager with the Duke and the Duchess… and flew into some pretty horrendous weather… The plane was bumpy and rolling around, it was quite horrendous, to be honest… When we did finally land, Prince William came rushing back to us on the plane to check if we were okay… He was laughing and joking with us and saying the turbulence made him spill his vodka and tonic at one point, but it was very good of him to check we were okay.” He also joked with the travelling media that he was actually flying the plane. And then they say Harry was the jokester.

The royal couple did arrive safely at Lahore, but not at no cost. Due to this unexpected setback, they had to alter their schedule and cancel an official engagement in Khyber Pass on Friday. This visit to Pakistan from the Duke and Duchess of Cambridge after a request was made by the Foreign and Commonwealth Office, and this has been the couples first visit the country.

During their trip, the two royals visited a school in Islamabad, took part in a cricket tournament and visited the Shaukat Khanum Memorial Cancer Hospital and Research Centre, the same hospital that in 1991, was visited by Prince Williams late mother Princess Diana.

READ NEXT: Kate Gave Her First TV Interview As A Royal During The Tour Of Pakistan

How William And Kate Will Homeschool George And Charlotte