Harry And Meghan Shared a memorable photograph of Princess Diana for a very sweet reason. In tribute of Pride month that just started, Harry and Meghan continue to support causes that were close to Harry’s late mother Princess Diana. On Saturday morning, they changed their ‘following’ list once again. “Continuing with our tradition to rotate the accounts we follow based on causes and social issues that matter to us: For the month of June we “proudly” shine a light on PRIDE,” the caption reads.

“This month we pay tribute to the accounts supporting the LGBTQ+ community – those young and old, their families and friends, accounts that reflect on the past and are hopeful for a deservedly more inclusive future. We stand with you and support you. Because it’s very simple: love is love. Images above from the accounts we are now following and artist Ruben Guadalupe Marquez.”

Among the nine photos shared is a shot from 1996, during one of Diana’s visits to the AIDS hospice London Lighthouse. She regularly would visit the establishment, as she campaigned for awareness and better treatment for HIV and AIDS patients. This was one of the late Princess’  most important causes.

Among the other causes, she championed that were included in the nine photos are equality charity PFLAG, UK LGBT homeless charity AKT and the It Gets a Better project. There is also a photo of Harry and Meghan, from their visit at the Terrence Higgins Trust charity fair, in honour of World Aids Day. The engagement has a particular meaning for the couple and for fans as it was the first joint engagements since they announced their plans to marry. The cause was also close to Diana’s heart.

Last year in April, just before the wedding, the couple made a visit to the Commonwealth Youth Forum, where they discussed LGBT rights. “Both Prince Harry and Miss Markle said they would put LGBT issues at the front of their work,” Jonah China, an LGBTQ activist from Kenya, said at the time.

READ NEXT: Harry’s Sweet Nod To Wife Meghan At The Garden Party

The One Thing Kate Has That Diana Always Wanted 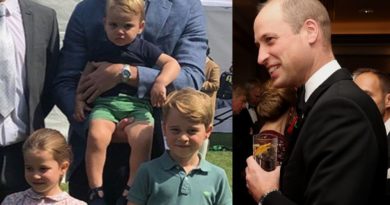