When Harry announced to the world on May 6 that he had become a father, not only was he proud of his newborn son, but also his wife. But it was his thoughtful tribute away from the cameras that truly expressed his joy.

Following the birth of their son Archie, Harry gave Meghan a stunning eternity ring to mark their growing family and their first wedding anniversary.

According to Harper’s Bazaar Harry worked with jewellery designer Lorraine Schwartz to create the ring.

While creating the eternity ring, he paid tribute by adding birthstones for Meghan, Archie, and himself on the underside of the delicate piece.

There is a green emerald for Archie, a green peridot stone for Meghan and a blue sapphire for Harry. Each of the stones has its own meaning. Emeralds symbolise love, peridots instil power in those who wear them and sapphires protect those close to you from harm.

A source told the magazine: “Meghan was touched.  A lot of thought went into it.”

While working with Schwartz, Harry also took the opportunity to have Meghan’s engagement ring reset with a new diamond band.

Fans noticed the change in the ring when Meghan and Harry introduced Archie to the world, and at Trooping the Colour.

During the couple’s engagement interview in 2017, Harry revealed he had specifically chosen a gold band for Meghan’s original ring based on her jewellery collection.

He said: “The ring is obviously yellow gold because that’s her favourite and the main stone itself I sourced from Botswana and the little diamonds either side are from my mother’s jewellery collection, to make sure she’s with us on this crazy journey together.”

And Meghan, she obviously adores it: “It’s beautiful, and he designed it. It’s incredible,” she said at that time.

We also saw Meghan’s ring again on Saturday during her surprise appearance alongside Harry at the London Stadium to watch Boston Red Sox play against the New York Yankees. Meghan has shown only twice since giving birth to her baby boy on 6 May, but that event was doubly important to her. 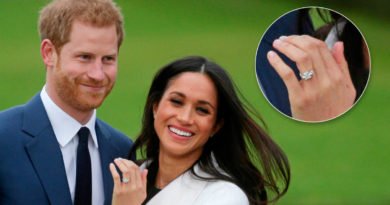