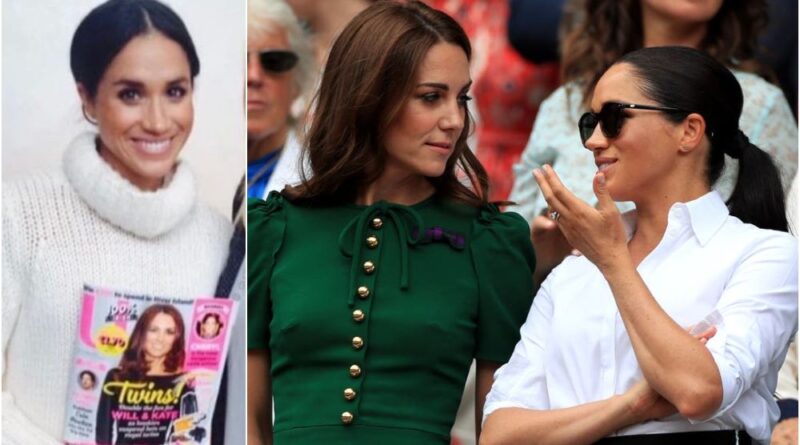 An old photo of Meghan Markle has just resurfaced, which shows her posing with a magazine cover of Kate Middleton. So why would fans care? Well, a debate has begun to rage online about how this ‘disproves’ the claims that Meghan had that she was “naïve” to the duties of royal life before becoming part of it.

In her interview with Oprah in March, Meghan said that she “didn’t grow up knowing much about the royal family”. This by all accounts, could be true. But this is not the main issue fans have with her.

The resurfaced photo with Kate Middleton magazine cover is reportedly from 2014, a full two years before Meghan even met and started dating her now-husband Prince Harry. In previous statements, Meghan has been adamant that she didn’t do any research on Harry and his family, nor how the royal family functions. I mean it’s doubtful, so why this charade?

“She said she didn’t do any research on Harry or his family before she got married!” one person tweeted. “Was that because she was more interested in what Kate had?”

Another wrote, “She has stalked the Royals for years!!!”

Certain fans were quick to jump to conclusions and throw around accusations, while other more normal people didn’t see this as having much importance.

“And the problem/controversy is?” one user tweeted, adding, “Kate happened to be on that cover.”

While this might not be a big thing, this isn’t the first time that Meghan’s words and her actions didn’t exactly match up.

Back in March, a report resurfaced claiming that the Duchess of Sussex had blogged about dreaming about becoming a princess seven years ago. And how coincidentally, she got exactly that….for a time.

“Grown women seem to retain this childhood fantasy,” she wrote in a 2014 post. “Just look at the pomp and circumstance surrounding the royal wedding and endless conversation about Princess Kate.”

Do we sense some jealousy? Or perhaps some disparaging? The post gives more weight to the photo, proving that Meghan had an interest in the Royal Family, perhaps even some bitterness towards Kate Middleton.

And the two haven’t exactly been best buds during Meghan’s time with the Firm. In the Oprah interview, Meghan talked about her sister-in-law left her in tears before her nuptials, addressing the fact that there were dozens of reports stating that it was Meghan was the one that made Kate cry over flower-girl dresses, saying: “The reverse happened.”

The Duchess of Cambridge has never addressed the claims head-on, with only some reports claiming that she was “mortified” over the allegations. Her uncle spoke out, saying that he “doesn’t believe” that Kate ever made Meghan cry. We might never know.

Perhaps we should just leave things be. Prince Harry and Meghan have already separated themselves from the royal family and are forging their own path. However, if Meghan continues with interviews that contradict her past actions, fans and media will call her out. And rightfully so.

READ NEXT: Duchess Kate Shares Emotional Phone Call With A Woman Who Lost Relatives To Covid