The two weddings and the birth of two babies Louis and Lena Elizabeth left a mark on 2018 for the British royals. So what will 2019 unfold?

Just like 2018, the biggest changes will probably be in the House of Sussex. First, Prince Harry and Meghan will move from Nottingham Cottage at Kensington Palace to the bigger Frogmore Cottage on Windsor Castle grounds. It was an unusual decision to have a senior royal live outside of London, and then out of nowhere came rumors about a feud between Meghan and Kate. Will the rumors continue, or will they quiet down in 2019?

Also, there’s another royal baby on the way. In October, Kensington Palace announced that Meghan was expecting a child, due in spring 2019. The Sunday Times reported that the Duke and Duchess of Sussex won’t be giving their child a royal title, to try to provide him or her with as normal an upbringing as possible.

They aren’t the first royal couple to do so—Princess Anne also opted out of formal titles for her children. The christening of the baby will be another major royal event in the calendar.

We should also expect Meghan and Harry to begin defining their roles in the monarchy. Meghan, it was revealed, will take on a new patronage in 2019 from her royal majesty. It isn’t known what, exactly, that will be. There’s also a rumor of a royal tour to the United States and Canada.

What about the Cambridges? As the Queen delegates more and more responsibility to her son and heir, Prince Charles, the Duke of Cambridge, in turn, will start preparing to become the Prince of Wales. Reports tell that these royal “lessons” already began. Then, there’s the raising of their three young children: George, Charlotte and Louis. Charlotte will start nursery school this fall. It is believed that she will join her big brother at Thomas’s Battersea, and her first day will surely receive significant press coverage (including an adorable official portrait). 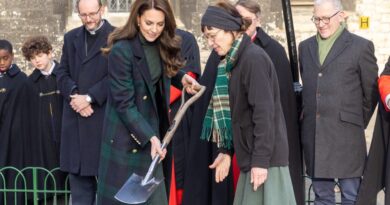