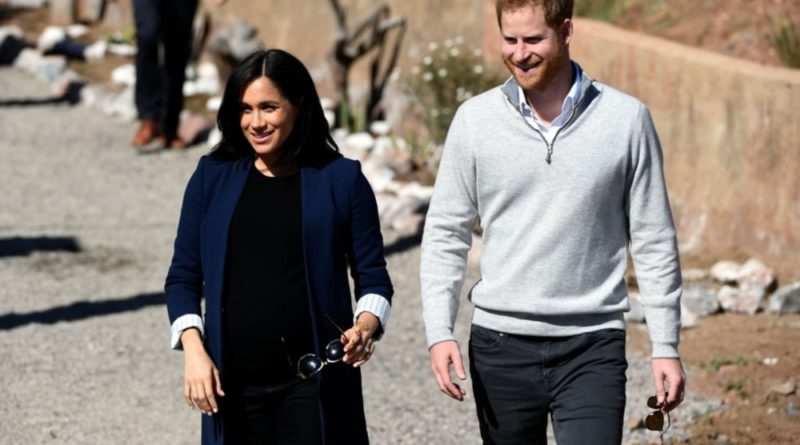 The Duke and Duchess of Sussex arrived in Morocco yesterday for the last overseas engagement before they become parents.

But why did the Duchess keep her distance from Harry when they arrived there?

Meghan and Harry were welcomed in Morocco last night, despite the flight being delayed for two hours. The couple will be there for three days, but many royal fans noticed something different about them instantly.

They do not usually shy away from a public display of affection, but the couple kept some distance from each other when they arrived at Casablanca airport. As the Duke arrived, he strode along the red carpet ahead of Meghan.

Meanwhile, the Duchess walked slightly behind Harry, just off the edge of the red carpet.

The Duke had the job of inspecting the guards of honor the Auxiliary Forces. They wore their white uniforms and stood in two rows at the side of the red carpet.

The Duchess wasn’t required to help Harry in that task, so she let him go ahead.

Later that evening, Meghan wowed in a red Valentino dress that had an embroidered capelet.

The couple visited a boarding house in a town called Asni this morning, where the Duchess received a henna tattoo of three flowers and a pattern along her finger on her left hand.

The artist was a 17-year-old girl called Samira, who has been living at the boarding house for six years. And What Else Will The Royal Couple Be Doing This Weekend?

They will be spending this evening at a reception hosted in Rabat.

The couple will also meet some influential Moroccan women, young entrepreneurs and disabled athletes. On Monday, they will spend the day visiting the Moroccan Royal Federation of Equestrian Sports. They will learn about Morocco’s plans to help children with special needs through equine therapy.

They will also attend a cooking demonstration in the afternoon, where children from under-privileged backgrounds in Rabat will learn traditional Moroccan recipes from one of Morocco’s top chefs.

READ NEXT: The Hidden Meaning Behind Meghan’s Red Dress For Morocco Arrival