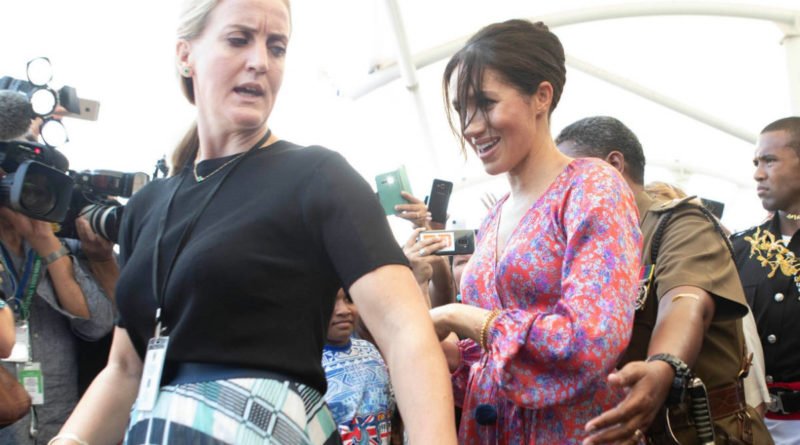 The Duchess of Sussex was supposed to spend way more time at the bustling Suva market. The royal aides blamed ‘crowd management issues’.

The Duchess of Sussex was quickly ushered away from her last public engagement of the day in Fiji after only a few minutes of being there on Wednesday. The reason behind this according to the royal aides was that “there were far larger crowds than expected.”

Meghan paid a visit to the Suva Market in the Fijian capital and there she met with lots of female entrepreneurs, however, her visit was cut short.

She left the market after only 8 minutes, even though she was expected to stay much longer and chat with the vendors. A royal aide said: “It was hot, humid and uncomfortably busy and there were far larger crowds than expected. She met everyone she was meant to meet and left.

On advice, she was taken out due to a crowd management issue.”

Meghan, who is currently pregnant, possibly in her fourth month, was supposed to spend at least a quarter of an hour chatting to the women who have been involved in the UN Women’s Project ‘Markets for Change’.

And even though the Duchess managed to have quick chat with some of the members, others were left feeling disappointed at not being able to meet Meghan too. “It’s such a shame as we were all very excited to meet her,” said one stall holder who had been positioned to expect a visit from the Duchess. “We started preparing for the visit three weeks ago and had been meant to meet her.”

On the second day of her visit to Fiji, Meghan finished her day with the market visit. She had the majority of her engagements solo that day. She visited the University of the South Pacific campus with her husband, where she even gave a short speech, and later she had a morning tea with the British High Commissioner to Fiji, and the market visit was after that.

READ NEXT: Princess Diana Would Be Proud Of Harry’: Fiji President Pays Tribute To Diana

What Did Prince Harry Tell Meghan Markle’s Make-up Artist After The Wedding?