It is well known that Kate is an avid sports fan even since her days at Marlborough College. She and William are also known for their competitive streaks during public engagements; from their Dragon Boat Race to their London Marathon training competition.

But there is one sport Prince William just can’t match up to his wife in. A former legendary player has revealed the Duchess of Cambridge “always beats” husband Prince William when they play tennis.

In an interview with the Daily Mail‘s Sebastian Shakespeare, Rod Laver revealed: “I’d met William and Kate a few times, and in the Royal Box you get a chance to chat with them a little bit. They play tennis against each other. William told me he couldn’t beat her.”

Back in 2017, during the couple’s tour of Poland and Germany, Kate also confessed to her crew: “No pressure, but I do want to beat my husband.”

The Duchess has been having tennis lessons at the exclusive Hurlingham Club to brush up on her serve. Just like their oldest child, Prince George.

After it was revealed that Roger was George’s favorite tennis player, he said: “I think I have a little advantage that I actually spent some time, you know, with him. So maybe I’m the only player he’s ever met, then you have a little head start in who is your favourite player.”

He added: “Look, he’s a cute boy. I love to see that they’re into tennis or into sports. Definitely. You know, his mum has always enjoyed tennis. That’s it. I hope that he’ll still say the same in a few years’ time.” 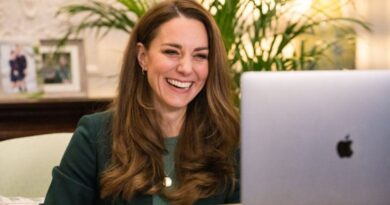