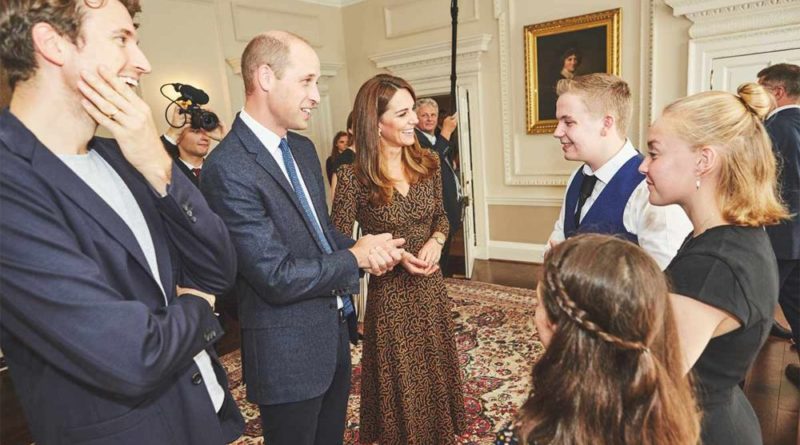 They invited Radio 1’s Teen Heroes of 2019 to their London residence, where they were joined by Camilla Cabello and BBC Radio 1 DJs Clara Amfo and Greg James.

The event, which recognized the finalists, was not announced by the royal couple ahead of time.

William and Kate spoke with the young people about their inspirational work, which will lead to them being crowned Teen Heroes at the BBC Teen Awards in November.

For the event, Kate looked elegant as always in the perfect autumnal dress. She wore Gabrielle Abstract Midi Dress in toffee and brown tones, with three-quarter length sleeves and a V neckline. She paired it with black court heels.

They wrote: “Radio 1’s Teen Heroes of 2019 visited The Duke and Duchess of Cambridge at Kensington Palace earlier this month, along with chart-topping superstar Camila Cabello and BBC Radio 1 DJs Clara Amfo and Greg James.

“Now in its tenth year, @bbcradio1’s Teen Awards is the biggest teen event in the pop music calendar and shines a light on some of the UK’s most inspirational teens, seeing them crowned Teen Heroes of 2019 in front of an audience of 14-17 year-olds.

“This is the fourth consecutive year that Radio 1’s Teen Heroes have been honoured with an invitation to the Palace. The ten finalists were greeted by The Duke and Duchess, who praised them for their inspirational work and their dedication to helping others.”

On 24 November, the three winners Hazel, 12, Rachel, 17, and Scarlett, 14, will be presented with their Teen Hero Award at Radio 1’s Teen Awards, which celebrates UK teenage heroes as well as the year’s best music, sport and entertainment stars.