Ever since they announced that they are expecting their first child this spring, Meghan and Harry have dropped a few hints about their baby.

While visiting the town of Birkenhead on January 14th, Meghan told the crowd when she’s due.

“We asked her how her pregnancy was going and she said she was six months and she tapped her tummy,” well-wisher Carla Gandy told PEOPLE.

THEY’RE KEEPING THE SEX A SECRET Kitty Dudley was one of the well-wishers who spoke to Meghan during the couple’s visit to Birkenhead.

“Meghan came up to me and asked me how old I was and where I went to school,” she told reporters. “I could see her bump and I asked if she was having a boy or a girl and she said, ‘We don’t know whether it is a boy or girl – we are keeping it as a surprise.’ “

During a cycling event at the Sydney Invictus Games in October, Harry revealed that the want his first child to be a girl. A video shows a sweet moment when a fan calls out to Harry that she hopes the baby “is a girl,” and Harry responds with, “So do I!”.

Fan Jean Elliott told Meghan she thought she was having a girl.

“Meghan said there are ‘strong opinions about that, but it’s a 50/50 split’” said Elliott.

NAME SUGGESTIONS ARE BEING TAKEN

During their visit to Birkenhead, a 7-year-old girl named Megan Dudley offered a suggestion for the name of the baby.

“I asked her whether she would call her baby Amy if she has a girl, and she said, ‘That’s a really pretty name, I like it. We’ll have to think about it.’ “-she told reporters. While touring in October, the pair hopped on one of Melbourne, Australia’s iconic trams for a ride to South Melbourne Beach with student sustainability leaders. Twelve-year-old Charlie Wolf took the opportunity to grill Meghan and Harry on a name for the royal baby.

Meghan kept mum, replying, “We’ve been given a long list of names from everyone, we’re going to sit down and have a look at them.” Meghan gave an update on her pregnancy during a visit to Brinsworth House, residential nursing and care home for British entertainers run by the Royal Variety Charity, in December. Speaking with a retired West End theatre actress Josephine Gordon, Meghan said she was doing “very good.” Then she paused, put her hands on her baby bump and added that she was feeling “very pregnant today.”

Shortly after the baby news was announced, Harry referenced the newest addition while speaking at a reception in Sydney.

“We also genuinely couldn’t think of a better place to announce the upcoming baby”-said Harry, looking over to Meghan. Appearing nervous, Harry added, “whether it’s a boy or a girl.”

BABY SUSSEX MADE ANOTHER SPEECH Harry also couldn’t help but mention the big news during his speech at the Invictus Games Opening Ceremony.

“First of all, thank you for the welcome you have given Meghan and me over the last few days,” he told the crowd at the Sydney Opera House. “I have been so proud to be able to introduce my wife to you, and we have been so happy to be able to celebrate the personal joy of our newest

READ NEXT: How Harry And Meghan’s Baby Will Make Royal History?

William Revealed One Regret About His And Kate’s Ireland Tour 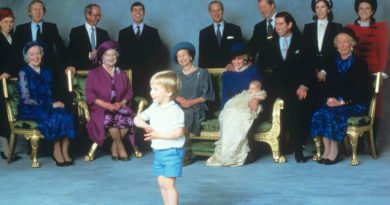 How Harry And Meghan Paid Tribute To Princess Diana In Their Official Wedding Photos?