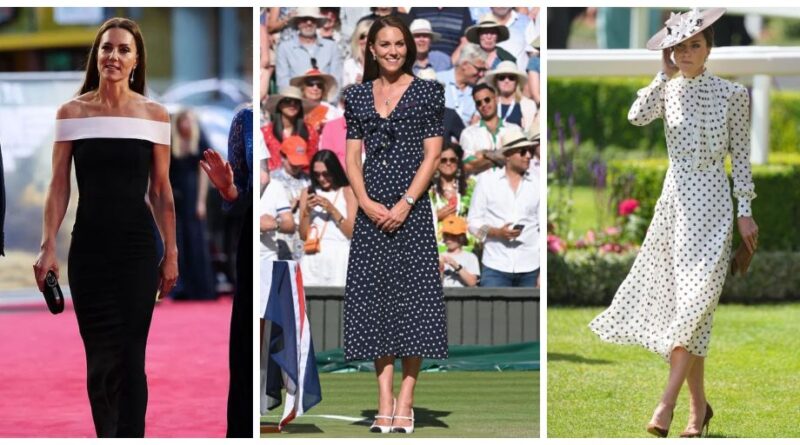 The Duchess of Cambridge has been named number one on Tatler’s Best Dressed list, so let’s take a look at all the best outfits Kate has worn this year.

It seems that there is nothing the Duchess of Cambridge can’t pull off, with the royal most recently opting to go with a polka dot scheme for her outfits. For her appearance at Royal Ascot in June, Kate went with a white and brown dress by Alessandra Rich, combined with a hat with floral detail by Sally-Ann Provan. This look bares a huge resemblance to an outfit with the same pattern that Princess Diana wore back in 1986 for a different horse racing event: the Epsom Derby.

During the whole Platinum Jubilee weekend, fans were treated to all kinds of fancy outfits and looks, such as this simple yet elegant look from the Duchess of Cambridge, wearing a yellow ensemble by Emilia Wickstead with a Philip Treacy hat, that she had previously worn to the service of thanksgiving.

A regular attendee at Wimbledon, this year was no different for Kate, as she went with a polka dot dress by Alessandra rich for her appearance at the men’s final.

4. March – Tour Of The Caribbean

In March Prince William and Kate embarked on their tour of the Caribbean, where the tropical weather allowed the Duchess to try out all kinds of outfits, from summer shorts for sailing events to beautiful silk gowns for galas. However, a simple standout was this light green dress worn in the Bahamas.

5. March – Tour Of The Caribbean

What a debut! For her first full glam look in the Caribbean tour, Kate went with a bold pink dress by the British brand The Vampire’s Wife.

6. March – Tour Of The Caribbean

This year a few standout moments have been when Kate goes with a suit instead of her regular dress attire, showing everyone that she rocks it better than most men. For her visit to Jamaica, she wore a white suit, excellently paired with an orange shirt and purse.

7. March – Tour Of The Caribbean

During the Caribbean tour, when the Governor-General of the Bahamas, Cornelius A. Smith, hosted a reception, Kate let her inner princess out with a light blue gown.

For any kind of royal event, the Duchess of Cambridge has a plethora of outfits to choose from, with outfits from every colour of the rainbow. For this year’s Commonwealth Day service at Westminster Abbey Kate wore a blue ensemble with a silk velvet collar by Catherine Walker & Co. with a coordinating pillbox hat by milliner Sean Barrett

For her trip to the Foundling Museum in January, Kate went with a similar look, this time wearing a black turtleneck sweater and trousers topped with a teal coat.

For Trooping the colour the whole Cambridge family were wearing blue one way or another, with Kate going for navy accessories to complement her white outfit.

For a garden party in Buckingham Palace back in May, Kate went with a great coral ensemble, combined with a bright pink fascinator that she wore for Trooping the Colour in 2017. This is certainly one of the top looks of this year’s spring season.

When it comes to red carpets, both Kate and William know how to make a splash. For the Top Gun: Maverick premiere in London, when the two joined none other than Tom Cruise himself, Kate wowed the public with a black gown with a white off-the-shoulder neckline along with some statement earrings.

Be it colourful colours or a simple white or black ensemble Kate’s outfits are always a joy to see. For April’s Anzac Day service, Kate recycled the cream coat dress she previously wore at Princess Charlotte’s 2015 christening paired with a halo headpiece and a poppy pin.

For the service honouring the late Prince Philip, many royal women went in green outfits. Kate, instead, went with a black dress with white polka dots and a matching hat with floral details. These are only a few of the dozens of outfits Kate Middleton has worn throughout this year, and only this small selection is enough to prove why she won Tatler’s