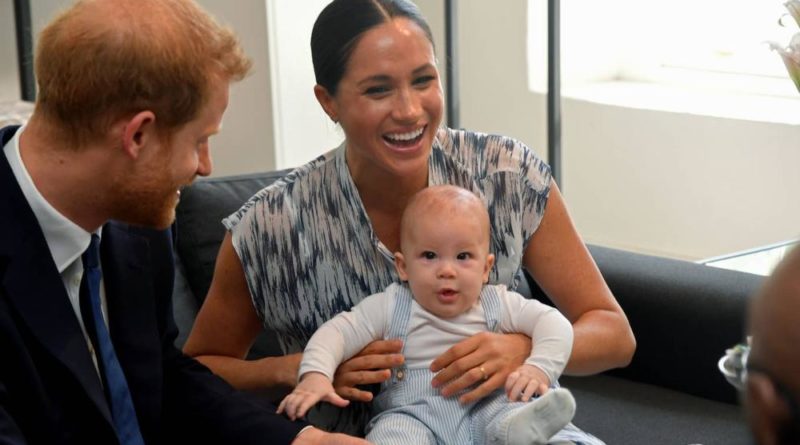 At the age of four months, Harry and Meghan’s baby son Archie Harrison had his very first royal engagement. On Wednesday, the little royal was taken by his parents for his first official royal engagement to meet with famed anti-Apartheid campaigner Archbishop Desmond Tutu and his daughter, Thandeka.

Archie looked happy and content in his mother’s arms as she carried him on his first official outing, documented on Sussex Royal’s Instagram stories.

For his surprise appearance, the little tot looked adorable in  pale blue and white striped dungarees with a white babygrow underneath and wooly socks.

Meghan, beautiful as ever, opted for a navy and white silk dress by Club Monaco with high heels and a sleek updo, while Harry donned a navy suit.

During the meeting, the Sussex family had a lively laughter-filled chat with the Archbishop and Thandeka. And dad Harry gave a sweet update about his sweet boy. Harry revealed that Archie “constantly wants to stand.” Meghan added: “He’s an old soul!”

“I think he knows exactly what’s going on,” Harry said of his son.

Meghan joked with the Archbishop’s daughter Thandeka Tutu Gxashe that Archie would have have to get used the the cameras in his life, while Tutu Gxashe joked little Archie was ‘going to be a ladies man’.

The Archbishop, a Nobel Peace Prize winner, who was effectively the leader of the liberation struggle during Nelson Mandela’s long imprisonment, said he was “thrilled by the “rare privilege and honour” to meet the royals. He spent half an hour with the couple and Archie at the historic premises of his Legacy Foundation in Cape Town, the Old Granary, a restored centuries old edifice built by slaves.

Harry previously met Archbishop Tutu during a Nov. 2015 tour of South Africa, when the royal presented him with an honor in recognition of his services to U.K. communities and international peace.

Ahead of the meeting, Harry and Meghan posted a video with Archie on the way to meet the Archbishop in their Instagram Stories on the Sussex Royal account.

The sweet video features Meghan carrying Archie (who beams at Harry walking alongside) as they arrive to meet legendary anti-apartheid activist Archbishop Desmond Tutu and his daughter Thandeka at the Tutu Legacy headquarters.

“Thank you Archbishop Tutu for your incredibly warm hospitality, Archie loved meeting you!” Meghan and Harry wrote on their Instagram.

They summarized their meeting in a second post: “Arch meets Archie! This morning The Duke and Duchess were honored to introduce their son Archie, to Archbishop, Desmond Tutu and his daughter, Thandeka. The Archbishop, a globally respected figure in anti-apartheid movement, is one of the world’s great champions of equality, and has spent his life tirelessly battling injustice. Their Royal Highnesses have joined The Archbishop and Thandeka to learn more about the work of The Tutu and Leah Legacy Foundation, and see first-hand how they are focussing on global awareness of the critical issues affecting the world.”

Archie, by the way, has been spoken about quite a bit on the tour.

When asked where Archie was during a visit to the District Six neighbourhood the couple revealed he was sleeping. Harry also revealed the Cape Town locals that his son was in awe, by the local landmark Table Mountain.

Today also marks Meghan and Harry’s last day together in Cape Town. Harry will leave later, on the royal charter to visit Botswana, Angola and Malawi.

READ NEXT: Harry And Meghan Revealed What Archie Did On First Day Of Africa Tour 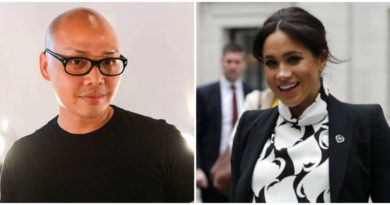 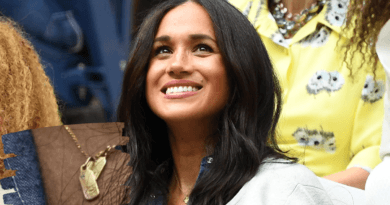 Meghan’s Subtle Tribute To Harry And Archie At U.S Open