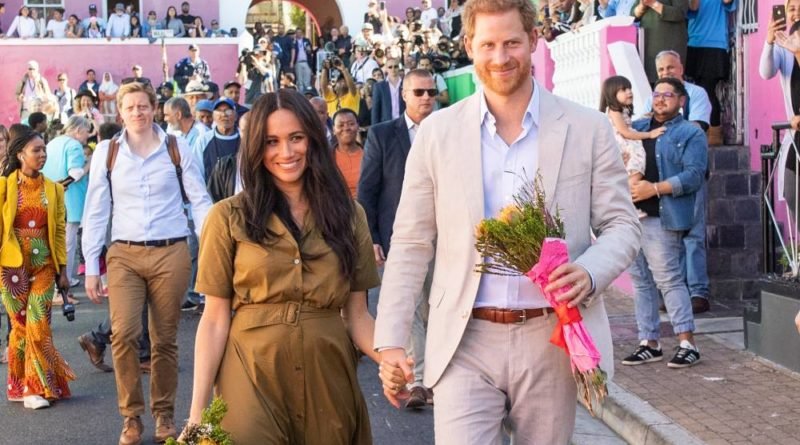 The Duke and Duchess, along with baby Archie, landed in South Africa on Monday morning and started their tour. There was a big day ahead of them, filled with tons of engagements and visits, and it was only the first day. This isn’t the first overseas for the royal couple, but this time it’s special, as now they have their almost 5-year-old son Archie with them.

Although he did not join them for the engagements on the first day, throughout the day the proud parents talked about their young boy a couple of times during the engagements and revealed where he was at the time.

During their visit to District Six yesterday, as they were on their walkabout, they met and talked a bit with Somaya Ebrahim, 81, who asked about their firstborn, with the couple just saying that he was sleeping. Another person in the crowd also asked about him, so Prince Harry just replied with: “He’s not grouchy, just exhausted”.

Harry also joked that his son was impressed by the new surrounding he was seeing during the same engagement. He told the Cape Town locals that his son was in awe, as much as a baby can be, by the local landmark Table Mountain.

He said: “He was staring out the window as we flew in. looking at Table Mountain.”

The young royal was seeing in his mother’s arms when they touched down at the airport and were leaving the airplane on Monday. He looked quite adorable in a woolly hat and a blanket that looks familiar with the one that his father Harry sported on a flight to Aberdeen back in 1985.

The royals started their trip on Sunday evening after travelling on an overnight British Airlines flight, which left the UK an hour after its scheduled time.

Meghan and Harry’s first day of Africa tour was a great success. The two met with locals and had some fun at their second engagement when they joined a group of dancers. Initially the couple just stood by and watched the dancers perform at the Nyanga Township in Cape Town, South Africa. But very soon, Meghan joined them, holding hands with a dancer, Lilitha Mazana, 23, dancing together to the music. Lilitha said after the performance: “Meghan’s a good dancer. She’s very nice. Her skills were fantastic. I’ve been dancing for ten years.”

Their final engagement of the day was a visit to the District Six Museum-Noor Ebrahim, 74-a founder of the museum, which tells the story of the neighborhood’s rich cultural heritage, said:  “We’ve had so many prime ministers and presidents here, people like the Obamas, but that was the best visit ever. They were very, very friendly and they mixed with people and that made this visit so special.”

He added: “They were very down to earth – I loved both of them. I told them it was an honour having them here. I even talked to Harry about the rugby and told him I hope England wins the World Cup – he was surprised I am supporting them. It was a real pleasure to have them here.”