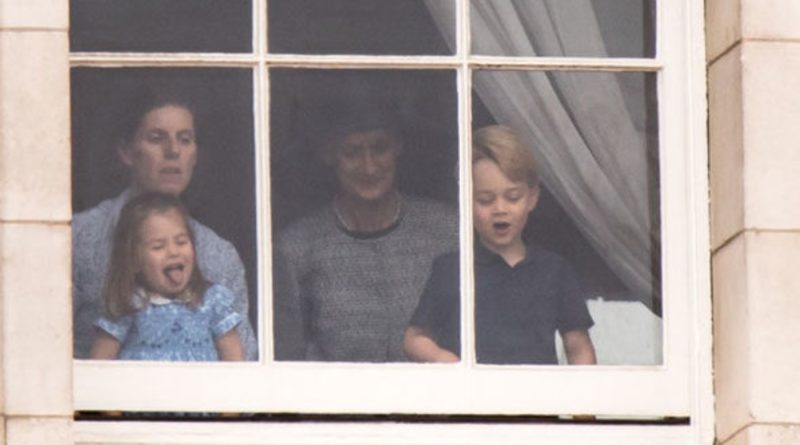 The little princess stole the show one more time.

Charlotte was seen sticking her tongue out while at the window of Buckingham Palace while watching the RAF 100 flypast with her brother George.

Their Spanish nanny Maria Borallo was taking care of the kids as they watched the stunning display from inside. As you can see from the photos, the little royals look pretty excited. They could barely contain it. George and Charlotte waved to crowds gathering outside the Queen’s residence to mark the Centenary of Royal Air Force.

While little Charlotte was showing us her tongue, her older brother Prince George was just as overjoyed to see the display as he opened his mouth in excitement and waved at the public.

Charlotte laughed as she looked over at George, at one point. The kids’s appearance comes only a day after the christening of their little brother Louis. Unlike today, it seems that the they took the christening really serious watching the photos of them. Mum and dad watched the flypast from the Buckingham Palace balcony. They joined other members of the family like the Queen, Prince Harry and Meghan Markle.

The Duchess of Cambridge surprised us pleasantly when she showed up for the event despite being on maternity leave.

Members of the Royal Family looked enthralled as they took in the action in the skies.

This is the second time Duchess Meghan has appeared on the balcony at Buckingham Palace, following Trooping the Colour. The flypast was a centrepiece of events celebrating the RAF’s centenary, with lines of invited personnel given a prime viewing position directly outside the palace gates.

Earlier in the day the royals attended a service at Westminster Abbey to celebrate the 100 years since the RAF was formed.

Duchess Of Cambridge Set To Celebrate A Special Event This Week